The canteen at Harrow Road was somewhere in the middle of the cold and dark concrete platforms of that station. We were cooking for the night shift; they were loading and unloading, receiving and dispatching mailbags, starting work at 7pm and throughout the night until 7am. This was during the week before Christmas. Several regular postmen organised and supervised a team of university students, mostly from Commonwealth countries; Australia, Canada and Ghana. I had my first confrontation with an African, a man from Nigeria, “Just because my skin is black, don’t think that my brains are black too,” he said to me very forcefully – although why he was so angry I cannot recall. I was working with George Whitebread, who had somehow arranged this comparatively cushy number; it was the sort of thing George was good at. Like me he was a second year sculpture student at the Royal College, he lived next door to me in Kensington Gore with Rosemary, (I thought her lovely), they were both from Bournemouth School of Art. Cooking the breakfasts at the canteen was best; eggs, sausage, bacon and bread, all fried and served just before the shift started at 7, and once again when the nightshift ended. Between times we were peeling, boiling and then serving potatoes with corned beef and carrots, or with a stew (from a tin) with peas, for a dinner in the middle of the night.

The following summer George landed a contract with the makers of the film Cleopatra. I was one of a group of students who worked for some weeks in George’s flat in Cremorne Mansions in Chelsea. We were tasked with making some of the furniture for Cleo’s boudoir and being well paid for it. We specialised in thymiaterion (incense burners) and candelabrum. Working from photographs of the original bronzes, making plaster copies that we painted black.

I was too respectable, even prudish, to be a total success with George. He tried hard to persuade me to open my eyes, or rather my mind, with various pills, but I resisted these efforts to enlarge my psychedelic experiences. After a year I’d moved on, towards others who took the life less seriously and the work more seriously.

One Christmas, as a temporary postman in London, I was given a delivery route near the College in South Kensington, comprising blocks of flats and residential hotels in the area around the Albert Hall, and up and down Queensgate and Exhibition Road. This was definitely the demographic for those who send and receive Christmas cards. Clearly an area well known to me, not too far to walk but with so much mail to deliver that I had to drag my cumbersome and impossible-to-lift mailbag along the pavement for half the day. One morning I delivered a packet to Sir Malcolm Sargent; he thanked me for it – that made my day a good one. 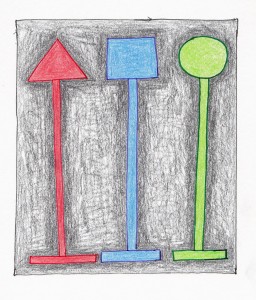 Living in South Kensington, I asked the Cleansing Dept. of the Royal Borough for summer vacation employment. Something like the work I had been doing in Sunderland. Impressed by my experience I was given the job of cleaning the street names in and around Notting Hill – in the late fifties an area of some tension. Working with West Indians, the lasting impression I had was that the men I spent the days with wanted to go home, to the Caribbean. Cleaning again, I was put to use in the yard, scraping the refuse lorries free of rust and dirt prior to repair and repainting. Our pride and joy was a hand-painted show truck; every detail of this leviathan was perfectly painted and polished for the annual parade in Brighton. At the same time my kitchen in Castletown Road was also being painted – best quality Kensington Cream.

At some point while I was living in Castletown Road, John Clinch and I began working weekends at the Design Centre in the Haymarket. There, we were considered to be temporary civil servants,   working with real civil servants and carpenters and designers. Every month or so we would dismantle the existing displays and construct new ones. This could take, and usually did, from Saturday evening when the Centre closed to the public, until very late on Sunday, (with a short break for a sleep). In any case the new exhibitions had to be ready for the 9am opening on Monday morning. 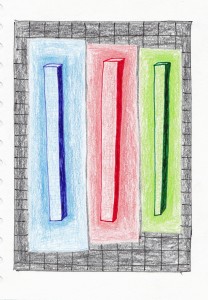 The display stands were based on a three dimensional grid, built with upright and horizontal shelving units throughout the ground floor and I think, a mezzanine – ‘modular’ was the word. Different configurations were created to show off every type of product, domestic or otherwise, within the two square feet unit. We were dismantling then rebuilding. The right angle ruled here and hundreds of objects were arranged accordingly. The job was well paid and something of an adventure to work against the clock.

Hughie Clarke worked for Michael Clark in Sloane Square until he left London, then he passed his situation on to me. A sculptor’s assistant working in a studio with Michael Lyndsey-Clark, his father Philip Lyndsey-Clark with Jack Fisher as his assistant. Jack also worked nights at a telephone exchange – he was a Canadian I think. He lived in Kennington, of middle years, a clever and skilful man. He was kind enough to store the sculpture that I wanted to keep, when I left London for Rome.

I was employed at the Clarks’ studio in Caroline Terrace on Friday afternoons, Saturdays and Sundays, for a very basic wage. Combined with a grant that was always minus a parental contribution, these wages added up to an income that was just enough to keep our heads above water. Friday was the important day because Michael Clark was working at the studio and was there to give me instructions for my solo stint at the weekend. (It seems that I have always worked at weekends). Friday was also the most difficult day to get away early from college. During the college holidays I worked at the studio all week, speeding along the Kings Road from Fulham to Sloane Square on my green bicycle.

Michael Clark made carvings – mostly stone, for Catholic churches and schools – Madonnas and Saints and the Stations of the Cross. We used Ancaster, Clipsham and Portland, this last st one I disliked intensely, much too hard.

Normally the height of the stone’s bed was about two feet, blocks of that depth were delivered to  Caroline Terrace with some difficulty, trollied down a very narrow path to the studio at the bottom of the garden. We worked from a small plaster model, most often cast by me; this was divided into three or four parts. I carved each piece of stone separately then built them as a stack, one on top of the other. Michael Clark finished off, joining up the drapery and adding details – I was confined to the roughing out, of course.

The studio speciality, our bread and butter, were the Stations of the Cross – after all we were just around the corner from Westminster Cathedral and Eric Gill’s wonderful sculpture of fourteen relief panels also known as the Stations of the Cross. These carvings were our examples – we worked from them. I cut the silhouettes of the figures, clearing the stone to the depth of the background, to place the characters in relief.
Carving stone, I used chisels that had been forged by Mr Pound at his workshop in Battersea. Dickensian in character, he spent his working days in a smoke filled forge, part of a small building with little ventilation and soot covered walls. He was a man stooped from a lifetime of hammering at his anvil. I knew from other sculptors that Pound made the very best chisels. I had the good sense to ask him to make me a set; including points, flat chisels and claws, before my time at Clarks’ came to an end.

This was when I finished work on a large Madonna; making the armature from timber and then using lath to follow the exterior form in order to minimise the clay needed; I roughed out the modelled figure. Then when Michael Clark had added his finishing touches, I made a plaster mould – to speed up the drying process we filled the mould with electric lights, burning day and night. When completely dry, I cast the Madonna with a laminate of fibreglass and polyester resin, the initial layer of resin was mixed with bronze powder to give the appearance of a bronze  – a bit like a fake tan. I was promised a bonus for this, my last job for the Clarks’ and one for which I was the expert; the experience and know-how were mine.

When I was desperate for money in Italy I wrote to remind Michael Clark of our agreement, eventually a cheque did arrive – one that was much smaller than I had expected.