I gave up alcohol years ago because my hands hurt; my right hand especially was permanently painful. My doctor passed me onto a specialist. The first question he asked me,
“Are you an alcoholic?”
“No.” I replied.
“Was your father an alcoholic?”
“No.” I replied.
He drank too much but he was not an alcoholic – or was he?
Apparently I had Dupuytren’s contracture. This is when the fibrous tissue in
the palm of the hand thickens and contracts, causing at least one finger to be pulled back inwards. The specialist, one of the most unpleasant people I have ever met, told me to come back to him.
“When you can’t put your hands flat on the table, then I’ll cut them for you!”
I didn’t like the sound of this. The welfare of my hands was obviously very important to me; having any part of them cut did not appeal. A definite No!
I reasoned, perhaps I should have been told, that my condition was connected to my liver and that alcohol, having been mentioned by the specialist several times during our short conversation, must be a factor in my condition.
I enjoyed drinking beer and wine but was never very good at it. Often ill, rather than hung over the day after a night at the pub, I was usually disproportionately unwell to the amount I had consumed. So it finally dawned on me that my liver was not up to it and I stopped. Alcohol was out. Gradually the distortion across my palms decreased and the pain in my hands lessened, not completely, but bearable. Many, many years later I learned from another specialist that my Dupuytrens contracture was a hereditary condition, with a cause unknown. Traditionally called the Viking Disease. Supposedly brought to the north east of England by the Vikings in the 10th century and definitely not connected to my liver. Mine were never artisan’s hands and it was inevitable that they would rebel against the harsh treatment dealt out by my making practices. Pounding day after day for years, with a mallet and chisel, and forever lifting and carrying too heavy sculpture or the materials for sculpture.

In Atworth village, a walnut tree stood for many, many years in the centre of the Recreation field. Old, it became diseased and as this was a play area to be kept safe, the beautiful tree had to be cut down.
I bought the lower half of the trunk; David Webb had the upper half. From my part of the tree I made a group of classic works – including Pipe, Walnuts and King-O, carving the green wood before it was dry and hard. 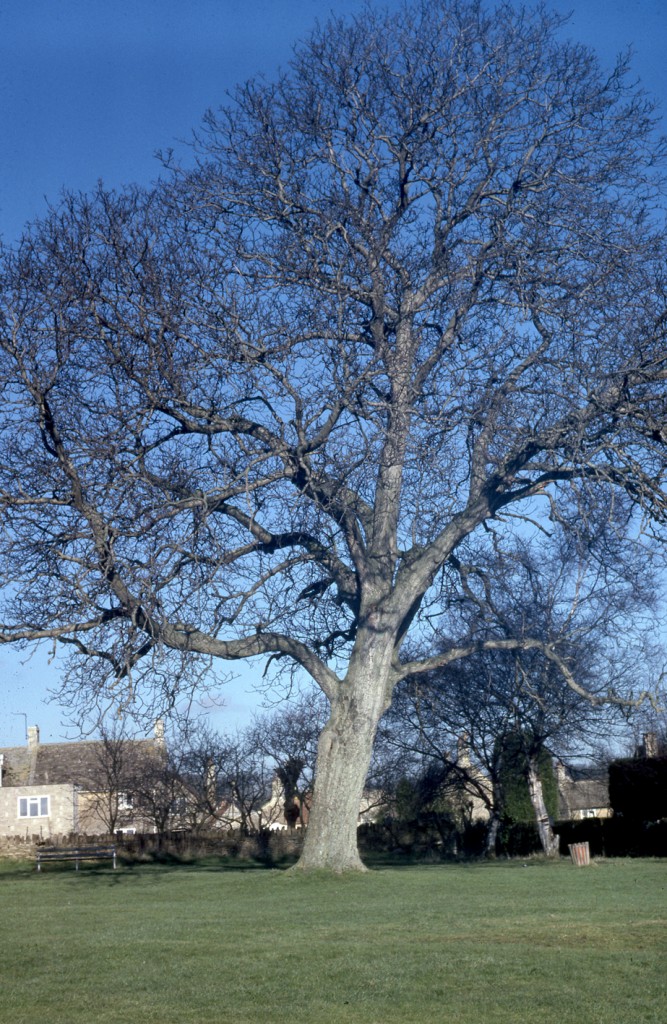 Many years later, at Chapel Plaister, I came across the Webb walnut. That part of the tree had been cut into planks about 180cm long and 9cm thick and then put into dry storage, so after twenty years it was very seasoned. Graham Webb gave me this treasure trove of splendid wood. There was enough material to remake a sculpture that had been destroyed after I left Pound Pill. This work had originally been made of green oak, a work that had a mind of its own and was badly distorted.

Starting on this ‘lost sculpture’, I had the walnut planks cut to the sizes I needed; I glued and dowelled the pieces together and began carving – a cylinder, a rectangle and the third piece of triangular section, each 80cm high. I made smaller versions, like branches; in total six pieces. A sculpture pointing in three directions that was to be more than two metres high.
As a rehearsal for this great opus, I carved a box-like ‘head’, working on this, I realised that the mature walnut was like iron and hard-as-hell to carve. Nevertheless I undertook the journey, sawing and cutting the wonderful wood, and carving with sharp chisels that gave rise to a surface with a shine.
But the weeks working this walnut finished off my thumbs; they had had enough and cried out ‘No more’. So I gave up carving and began to work in clay.
To date all the parts of this major sculpture have not yet been fitted to each other as was intended, but these disassembled pieces have come together in an unpredictable conclusion – A Memorial. 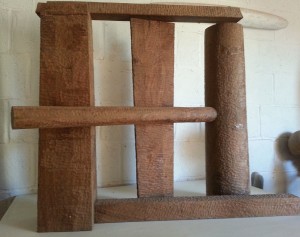 I gave up smoking too. This is an indulgence that I still miss. I enjoyed smoking but hated the addiction. I could not face the fact that every day for the rest of my life I needed to smoke at least twenty cigarettes. This state of affairs became so abhorrent to me that I was determined to stop. I’d gone from cigarettes to pipe and back again. Smoking a pipe was bad; it was almost a constant fixture in my mouth, being sucked at all the time and never satisfying. A dirty habit and a cruel imposition on my family, friends and those I worked with, indeed anyone who was near me. I littered my habitat with pipe scrapings, carbon and wet tobacco. I prefer life without ashtrays and without yellowing walls and smelly curtains.

John Repper and I stopped smoking together, a competition that never really got off the ground. Chewing nicotine gum helped a bit, but was so awful that we soon stopped using it. We ceased craving in about two weeks, surprising ourselves. John and I put on weight, but food tasted good again. 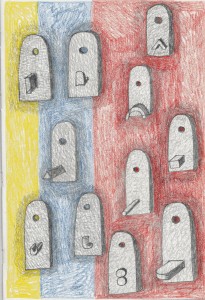 Next to go was coffee, but never tea, and then I gave up meat. My children and my students introduced me to vegetarianism. You are what you eat they admonished. Recovering from a stomach virus I could not face meat and since then I have developed an aversion to eating animals. But I eat fish! A non-meat diet then, as  I am not a lover of vegetarian dishes.
All this abstinence and healthy living should make me feel good and fit for work. But as old age takes over, the active days are becoming hours and the hours become minutes. My bones ache and every effort is followed by a punishing tiredness. Recharging the batteries takes a good deal longer than it used to.
Nevertheless the need to work persists. Being an artist still fills my days, not a preoccupation that I shall readily give up.