It has been my habit to regularly send out information about my current work – as photographs, a CD or DVD, and more recently on a memory stick, dispatching these to approximately twenty-five people who are associates in the Art business or to those friends I rely on to have a supporting interest in my work. At the moment I am making sculpture using clay which is then fired, and small bronzes, countless drawings and very limited editions of lino prints.

In 2007 I sent one of my CDs, a slideshow of fifteen small bronzes, to the curator Sarah Brown. The images were supplemented by xylophone music, this was taken from recordings made in Ghana, of Christopher Doozie (my teacher) and me, playing together during one of my lessons at his home in East Legon, on the outskirts of Accra.

Sometime later I was pleasantly surprised when Sarah asked me to exhibit at Huddersfield Art Gallery during the International Music Festival of 2008.

We arranged a studio visit, unusual and much appreciated – it is rare for me to work with a curator who comes to see the sculpture prior to the show. In fact I moved the prospective carvings and bronzes from my small studios into the barn conversion next door (with the kind permission of the landlord Graham Webb), a large empty space, newly decorated (partly by me) and with good light. So there was an exhibition before the exhibition.

Sarah gave me the opportunity to explore the notion suggested in the CD, making ideas in sound to accompany the three main sculptures that were to be exhibited, one in each of the galleries available to me. These works would have an appropriate sound-track that, all being well, was complementary to the experience of looking, and a means of arresting or slowing down the assimilation of the work.

My studio at Chapel Plaister backs on to the home of musician Cameron Jenkins, his family and their dog, Darcy. Together Cameron (as the expert) and I arranged some parts from my xylophone recordings, to play contentedly together. A composition known as Best Xylo – percussion music that seemed to me to be a natural complement to the group of woodcarvings destined for the exhibition and called Band of Woods.

Through my friendship with Cameron I became acquainted with Nick Franglen, he is usually characterised by his partnership with Fred Deakin and Lemon Jelly. More recently he teamed up with Charlie Casey, they play together as the ‘guitar electronica duo’ Blacksand, noteworthy for the unusual locations in which they perform; for example in a submarine, another time in an underground stone quarry in Box (an ambitious and adventurous gig, hard work but worth it) and yet again in an abandoned military facility.

So with music in the air and music being called for, I chose to have recordings made of the sounds of the bronze casting process and the making of my small bronzes. This is not an original idea but a new adventure for me. Cameron recorded each procedure and planned the sound piece that would accompany Across the Board, a painted table laid with 86 bronzes, and the major work made for Huddersfield. The exhibition known as Carving and Casting in Concert. 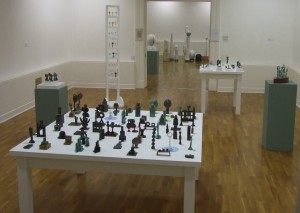 Nick Franglen took Cameron’s recordings and turned them into a constructed work – a composition or assemblage, a sound loop to play continuously (during the Art Gallery’s opening hours). I asked Nick. “What shall we call it? “Well, I call it music”, he said. We agreed that Counter would be an appropriate title. 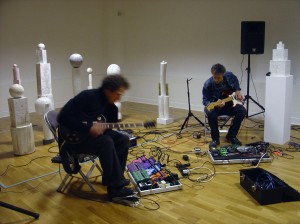 Blacksand amid the woodworks 2008

One Sunday afternoon during the run of the exhibition, Blacksand played in the gallery, amongst the ensemble of woodcarvings. This was another performance in an unconventional venue to add to their catalogue. 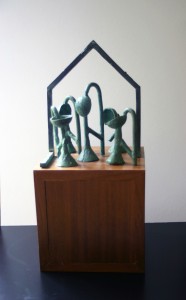 The third sculpture with sound, stood as a sentinel at the entrance to Carving and Casting in Concert. The work consisted of a crowd of little bronzes convening within a pointed arch and sitting on top a white plinth. Emanating from inside the plinth was music – Canon, an arrangement of a popular nursery rhyme, played by striking the bronze bell-like sculptures with xylophone mallets. 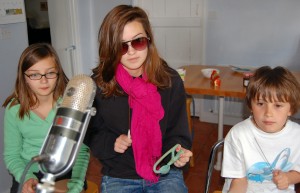 The one and only performance by the Bell Band: Holly, Tallulah and Louis, who are the children of Cameron and Carrie.

Sometime later I was once again drawn to a popular children’s song for a memorial sculpture in remembrance of Rachel Evans–Milne. This time I performed and recorded the piece; striking three suspended bronze plaques as tympani. This formed an arrangement called Twinkle, which was heard through dangling headphones. 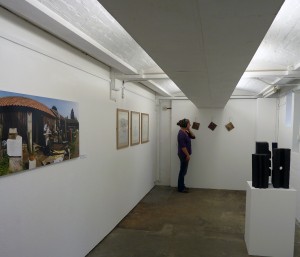 At Corsham Court in 2009, the MA ceramic students introduced me to Valentine clays, particularly the professional black clay, known as Black Chunky. Its ‘robust nature is excellent for sculptural works’, the brochure said.

Working with this very good tempered material that was in fact a very red colour until firing transformed it into a dusky black, gave me a new way of working and offered a return to modelled sculpture. Once out of kiln the sculpture was outdoor-ready, a process  with an elegant directness of method. 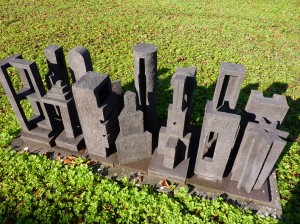 Once more Nick Franglen agreed to join forces with me to create music to ‘go with’ these two sculptures, sounds that would arrest and give pause, using the noises of making with Black Chunky. I recorded the sounds of the ceramicists working clay at their benches  and in the kiln room the noises of the kilns reaching temperature and then cooling, and much more. These basic ingredients were sent with a video of the two sculptures to Nick. They were shortly returned to me as Pact – a soundtrack for 2 sculptures, lasting eleven minutes. This music is complementary to the experience of looking at the sculpture and I believe reinforces the feeling of desolation; my sadness at the unceasing conflict and the frustration that peaceful coexistence is so elusive. 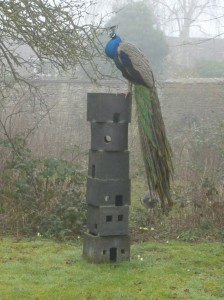 Pact with video was premiered at Corsham Court to an audience of MA and PhD Ceramic students. When it finished they clapped enthusiastically. This was very gratifying, although not surprising, as they were in the main the participants!