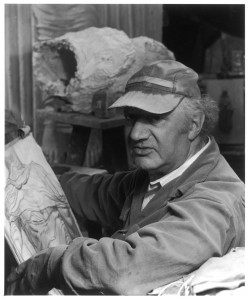 Jeremy Rees taught Typography and Design at Bath Academy; knowing him there I asked him to visit my studio, or perhaps he asked me. I was a newcomer to Corsham and there may well have been some curiosity on his part as to my sculpture.

I lived in Moor Green in Neston then, with a studio at the entrance to the MOD stores at Hawthorn, not far away. This rented building had two little rooms and a lavatory – all cream and green painted brickwork. I worked with the bin-full of clay, given to me by Lady Epstein after the great man’s death, that John Clinch and I had collected from Epstein’s studio in 1961 when we were at the RCA. It was very special to use Epstein’s material. It did occur to me that I might find a modelled thumb or a toe, a fragment of some sort; but there was only very good clay, well used and therefore elastic; it was malleable with the oil from constant handling.

At Neston I was making post Royal College work – first clay, then a plaster mould to be filled with a laminate of Ciment Fondu and fibreglass matting. It was cast sculpture that was hollow and therefore light and strong – but not that strong. This type of concrete casting was made from pieces ‘squeezed’ together, leaving the joining seams vulnerable to frost. If the casting was not perfect, in a short time the sculpture literally fell apart.

John Hoskin suggested I should offer Jeremy some suitable refreshment when he came first to my home to look at my mono prints. Something appropriate for a Saturday morning visit; he suggested Madeira with biscuits. I think Jeremy and his wife were as uncomfortable with wine and biscuits, as I was, and would probably have preferred tea or coffee. As Jeremy was the first visitor to my studio, I was nervous and tongue-tied, not at all confident that I could articulate the thinking that led to the making of the work, or indeed how much I needed to say.

In my little workspaces (all my studios have been small) I paraded my sculptures; either head-like or leg and foot-like, after Giacometti and after George Fullard, all painted with Brunswick Black and polished.

The Rees’s had opened their first Arnolfini Gallery above Robert’s bookshop at the Triangle in Bristol. I was asked to show there in 1963, in the exhibition Four Sculptors – Bruce Taylor, Michael Pennie, Roger Leigh, Mark Ingram. At the opening I was surprised and a little dismayed that my dozen works on paper had not been hung but stood on the floor, leaning against the wall. There must have been a reason for this, but I was too timid to ask. I suspect that Jeremy was less than wholehearted about the antique finish on my frames. Nevertheless, these frames were popular with Ken Lee who borrowed them to show his drawings in Oxford. I was reimbursed for this loan with a charcoal drawing that Ken had made in Anticoli, the village on a hill, not too from Rome – this image of Italy has hung on one wall or another in my homes ever since.

I am reminded of these events because a drawing from that Arnolfini show has recently been re-framed, this time in straightforward oak; Abraham made in 1960, pencil and charcoal, depicting a striding figure with a burden. This drawing was my response to a journey – when I carried a roll of lino destined for the hall and kitchen floor in my basement flat in Castletown Road. I remember lugging the heavy roll from Portobello Road to West Kensington by Tube then walking home. This weight seemed to fuse to my shoulder and then to the rest of my body and after a while it felt like it had always been there and would be forever. It had been an extremely uncomfortable and disquieting experience. An episode that led to drawings as preparation for the sculpture that won the Rome Scholarship. The responsibilities of marriage and fatherhood were just beginning to dawn on me, and were made manifest in an anxious work, more aligned to the sculpture that went under the headline Anxiety of Fear than the more joyful and inventive work of the New Generation that was just around the corner.

This drawing is presently hung in Corsham Court; I pass it often but never without a moment of unease, because it is a glance backwards to a twent-six year old beginner. 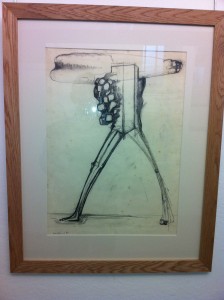 For some years Patrick Reyntiens held annual exhibitions of sculpture in the grounds of his house and stained glass studios at Burleighfield, near High Wycombe,

In 1968 I exhibited Ziggurat, a work in polyester resin, fibreglass and wood, made with the assistance of a very young Ivor Heal. On the last day of the exhibition I had to make a dash to retrieve the sculpture: I travelled to Burleighfield and back in my old Peugeot 403, (a car that functioned as a hearse in France, and great for transporting sculpture in England. I returned Ziggurat to my studio just before Bernard Meadows came to Pound Pill on an Arts Council Purchase visit the very next morning. When Bernard asked me which sculpture I would like the Arts Council Collection to have, I said Ziggurat and he agreed. 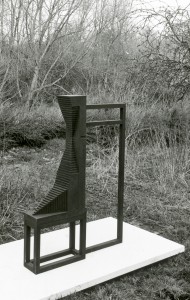 The Burleighfield artists were young sculptors ‘of promise’ – of the same age and similar experience to me and with a distinctly competitive edge. This was a set that included Ralph Louw, Frances Morland, John Panting, Roland Piché, William Pye, Wendy Taylor, Brian Wall and Derek Woodham.

Whatever the sculptures the rest of us exhibited, it was always the shiny Bill Pye sculpture that took centre stage! Usually large and most often nickel-plated, the reflective surfaces of Bill’s work always looked good outside, especially against the greens of trees and lawns. It was sculpture made-to-be-photographed, and usually provided the image that featured in any exhibition reviews. Even then my work shunned the limelight and was, I thought, well placed; like works of Germaine Richier (a favourite sculptor), half-hidden among the shrubbery, waiting to be discovered.

Michael Pennie, Small Sculptures and Drawings 1971 was an exhibition at the Ceolfrith Gallery, also known as Sunderland Arts (Ceolfrith was a Christian Abbot and mentor to the Venerable Bede). Of the impressive number of students from Sunderland College of Art who finished their training in London, disappointingly, almost none of these were to go on and have a sustained career in the Arts. They seemed to wilt once adrift from Harry Thubron’s mesmerising orbit. Thus this show at the Ceolfrith was a somewhat smug return to Sunderland to demonstrate that I had made it, albeit in a very modest way. After a very long journey I arrived outside the gallery in the centre of Sunderland with a carload of sculpture and drawings to be told, “You can’t park here,” which made my return ‘home’ less than triumphal.

That weekend coincided with an event arranged for art lovers by Richard Demarco: a coach tour to Durham Light Infantry Museum, Durham’s largest contemporary art gallery. But who was showing, I don’t remember. Neither do I recall the other places we went to, only my relief when the day was over!

The exhibition Michael Pennie Small Sculptures and Drawings, went on to the Richard Demarco Gallery in Edinburgh where it joined up with work by John Furnival  (also a student at the RCA and a resident of Kensington Gore as well as a colleague at BAA at Corsham and Bath), and Alexander Fraser, the Scottish landscape painter.

My grandfather was a Scotsman, raised in Aberdeen and for a time employed at Rosyth Dockyard on the Firth of Forth. My first time in Scotland, as a boy, was with ‘the Grandad’. I think of the Highland Games that took place in the shadow of Arthur’s Seat and the wonder of the Forth Bridge. When I was an art student at Sunderland there was an annual expedition in cars, driven by our more amenable tutors, such as Derwent Wise, to see the blockbuster summer exhibitions (Vincent van Gogh for example) in Edinburgh’s National Gallery.

The Midland Group was an influential Arts Organisation in Nottingham, from 1943 until 1987. My association with the gallery in East Circus Street was throughout the Sixties, when the inestimable Sylvia Cooper was the Director. Particularly significant for me was a quartet of exhibitions, all with curatorial input from Tim Threlfall (formerly an independent student at BAA).

To begin with, in 1967, there was the exhibition Michael Pennie: sculpture and drawings, consisting of twelve sculptures and twelve drawings. All the major works of that period were present. Stepped Man, was exhibited at Nottingham as a plaster cast (how heavy was that?), subsequently re-cast in polyester resin but never finished, and a casualty of my changing circumstances. The invitation card to this show carried a quotation from David Smith that read, “I am selfishly working to the best of my ability which as far as I know is okay”.

This exhibition was followed two years later by Sculpture in Nottingham as part of the Playhouse Arts Festival of 1969. My contribution was Pyramid, sited in Maid Marian’s Way outside the opticians called Curry and Paxton’s. It was a sculpture constructed with the help of Alcan, who loaned me four sheets of aluminium. I was introduced to Carl Andre at the Opening of this show; he was quietly kind about my sculpture. 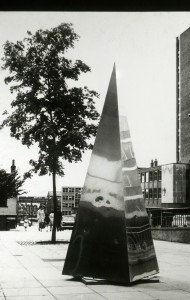 Sculpture in the Minster was ‘an exhibition of modern sculpture arranged by the Midland Group Gallery.’ Artists included John Hoskin, Bryan Kneale and John McGill. My work at Southwell Minster was called Encampment, a sculpture that consisted of three very minimal black blocks sitting quietly on a black ‘carpet.’

Minimalism, or in effect the work of those sculptors who became categorised as Minimalist – Carl André, Donald Judd, Robert Morris, Richard Serra and Tony Smith – was a breath of fresh air for me. It provided a clean slate and enabled me to have a sharper focus on the object, stripped of the baggage of history. It was a relief to be making sculpture without the necessity to include and make evident the particular experience that initiated the work, and to be able to make work without a programme of required responses. The notion that a visitor to an art gallery can ‘understand’ a painting or sculpture in a minute or two is nonsensical. Making art not only takes time, it requires from the creator a lengthy preparation to even begin the process of ‘finding out’ that will eventually lead to manufacture and realisation.

Perhaps the most remarkable exhibition at the Midland Group Gallery was Visions, projects, proposals, curated by Tim Threlfall in 1970. My contribution was Page from a Giant Sketchbook. This drawing was en route from my show at Angela Flowers Gallery to the collection of Northern Arts in Newcastle. A very large work in black ink, describing a sculpture to be built on Salisbury Plain, some twelve miles and wide and twelve miles high! What was extraordinary about the exhibition, now fading rapidly from our collective memory and soon to be completely forgotten, was the range and number of participants who were thinking and working beyond the limitations of the studio and the gallery. Exhibitors included Robert Adams, Constantin Brancusi, Hubert Dalwood, Graham Day, Richard Long, Jene Highstein, Kenneth Martin, Robert Morris, Isamu Noguchi, Claes Oldenburg, Robert Smithson, Vladimir Tatlin, Tim Threlfall and Bath Academy of Art, as winners of the international prize, Travail d’equipe, for their project Jardin Anglais.

“The sole purpose of the arts is neither description nor imitation, but the creation of unknown beings from elements which are always present but not apparent,” wrote Raymond Duchamp-Villon in 1911.