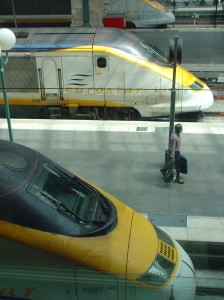 Excluding travelling by coach or hitch-hiking between the north of England and the south, I did not go any distance until 1961 – flying to Italy to take up my Rome Scholarship. My first trip to Paris was with Peter Green, my friend and colleague, in 1976 (what a remarkable year that was!). We travelled by train to Dover, then Hovercraft across the Channel to Calais, and another train to take us to Paris (we had our picnic on board). We could only afford to stay in Paris a couple of days, long enough to see a few of the sights, some galleries and of course, the revelation of the Pompidou. I loved every moment in Paris; it is the capital city I have visited more often than any other, except London.

It is my habit that before sleep I read for a while, usually a crime novel. For a long while these were Scandinavian, but before Nordic Noire I read mostly French stories, in English.

Marlene and I used to stay at Rue de Lancry in the 10th district of Paris, not far from Republique. Like a good deal of the City of Light, this is an area of shops, little restaurants and many, many apartments. At the end of the street is the canal St Martin, a waterway with locks, cast iron bridges and tree-lined banks, the canal transforms the heart of the district. When my friend Michele, her husband and daughter were in Italy during August, Marlene and I would stay in their apartment for a few days. 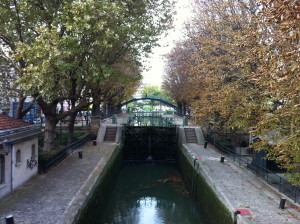 Along the street, a short walk from an excellent boulangerie – and opposite the Fire Station – there is a covered market. The Marche Couvert Saint Martin is a modern building, two storeys built around the remnants of a former market which is packed with stalls selling good food. Every other day we made a beeline for the delicatessen to buy freshly made pasta and a fresh tomato and herb sauce. Looking on while a handsome blonde woman, attractive with a smiley face, worked her pasta-making machine. We always chose the sauce recommended by the man we thought to be her husband. He was good looking too, and to Marlene and me they appeared to be an eye-catching couple in their late thirties. First year at Rue de Lancry and the second year it was the same procedure, but the third time was different. Both the pasta and the sauce were sold to us by the husband and, in the eating, were as tasty as ever. His wife, at least we thought she was his wife, was on holiday. A small disappointment, but unremarkable. 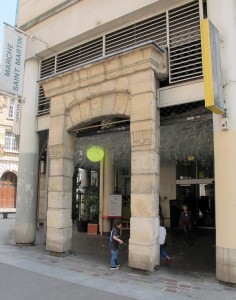 On other visits to Paris, for weekend breaks, we stayed at a hotel around the corner from the Rue de Lancry apartment, lodging again among the familiar streets and close to Michele, who cooked us dinner. One evening we were told the story of la belle femme du Marche who went en vacance and never returned. Her continued weeks of absence aroused suspicion among the other stallholders, the Surete were called in and a police search was instigated: a crime had been committed. The body parts of a woman were found in the market, in the freezer behind the shop, in fact, in more than one freezer. It was the pasta-maker, her remnants had been frozen for some time. In due course the ‘husband,’ in reality her lover (he was someone else’s husband), was arrested and charged with murder. He was tried, found guilty and brought to justice.

In my view Georges Simenon was the best of all crime writers, I have had a lifetime’s fondness for Maigret. This crime passionel in a Paris market seemed to me to be an archetypal case for Maigret. Actually the fictitious Jules Maigret lived beside the canal, in the rue St Martin, just around the corner from the Marche Lancry! 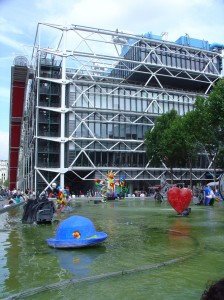 Paris, the City of Light, is for me, the City of Sculpture. It is the place where the great sculptors worked. An explosion of imaginative and inventive artistic activity took place within the latter half of the nineteenth century and the first half of the twentieth. This sense of sculpture that infuses Paris I do not experience in any other place except, and to a far lesser extent, in West Yorkshire. Off narrow streets and on the boulevards, in parkland, behind walls and down garden paths are the studios where great sculpture was made.

The father of modern sculpture’s museum is in Paris, well known as the Musée Rodin. Last time there we delighted in La sculpture dans l’espace, a temporary exhibition with sculpture by Rodin, Brancusi and Giacometti.

Rodin’s assistant Antoine Bourdelle (1861-1929) the Great Romantic has his own museum housed in his former studios and home at 18 rue Antoine Bourdelle. Maitre Bourdelle was a formidable teacher – his students included; Giacometti, Germaine Richier, Maillol, Matisse and Zadkine. 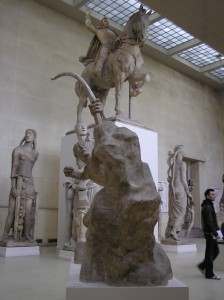 Aristide Maillol’s museum is in the Rue de Grenelle, established by Dinah Vierny, his beautiful model and companion for the last decade of his long working life. Maillol, a French Catalan, spent his 82 years between his home and studio on the outskirts of Banyuls-sur-Mer, a Mediterranean town at the foot of the Pyrenees, on the border between France and Spain.

Most biographies consider that Ossip Zadkine’s studentship began in London. My fondness for him is firstly because of his sculpture, especially the woodcarvings, and secondly because his study of sculpture actually began in Sunderland (and so did mine!). As a 15 year-old he travelled from Vitbesk (now Belarus) to his uncle in Sunderland, to be an apprentice coal-merchant. This uncle, recognizing Ossip’s talent, provided him with a mallet, chisel and wood to carve and a space to work in his garden shed. For a while Zadkine took classes at the local art school, before he went to London and Regent Street Poly to complete his studies.

Following Zadkine’s death in 1967, his wife, Valentine Prax, inherited the artist’s estate. When she died in 1981, she made the City of Paris the estate beneficiary. A year later the city opened the Musée Zadkine, located at 100 Bis Rue d’Assas. Zadkine’s former studio, workshop and garden  houses 300 of his sculptures. 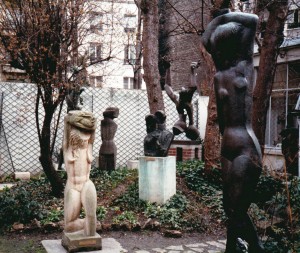 Brancusi’s Studio – or more correctly the re-creation of his actual studio (by Renzo Piano), that was originally located near Montparnasse – sits modestly in the shadow of the Pompidou.   The Atelier hadn’t been open to the public for too long in 1978 when Marlene and I first went there together. Two women, volunteers, possibly Friends of the Pompidou, were looking after the sculpture. When Marlene and I entered, these two guardians graciously moved from work to work lifting the beaded dust caps that were protecting each masterpiece; Birds in Space, The Cup, The Cock and more, were revealed for our delight. We were the only visitors, and while I looked hard at the sculpture and wondered at the great man’s working life, Marlene was invited to sit on a stool, (one carved by Brancusi, of course). After I had taken photographs I sat beside her on another carving, we remained in quiet contemplation of the wonderful events surrounding us, with the watching women in the background. 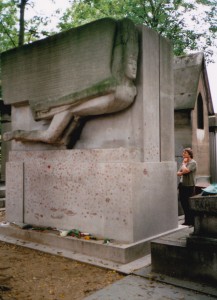 Almost forgotten, as it is presently closed for renovation and not an artist’s studio, more a grand museum, the Hotel Sale (in the centre of the Marais district) houses the Musée Picasso. An enormous and extraordinary collection of sculpture, paintings, drawings, ceramics, etchings, lithographs and beautiful lino prints, either made by Picasso or owned by Picasso. All donated by his family to the state in lieu of inheritance tax.

Epstein is famously represented in Paris at Pere Lachaise cemetery by his great monument to Oscar Wilde. In 2011 the sculpture was sanitised, the stone cleaned and ‘restored,’ now the tomb’s surface, hidden behind an transparent screen, is no longer covered by kisses.

I have yet to make it to the Foundation Arp at 21 Rue Des Chataigniers, just outside Paris. I will soon, the former house and studios of Jean Arp and Sophie Taeuber at Clamart (not far from Rodin’s workshops at Meudon) are an irresistible future adventure.