My work spaces at Graham Webb’s farm are two stone-built stables dated 1990; both are about sixteen feet square with interior block work. Each space has its own door within a planked wall. Over all is a fine tiled roof. To date, I have been there for more than twenty-five years. When I was employed at BSU, I made sculpture at Sion Hill, so these stables were my sculpture store before I  retired from teaching. Then, when I became a full-time sculptor (at last), the studios at Chapel Plaister became my full-time work place.

My first job was painting the walls white. Next I made a level floor; I covered half of each room with a plywood stage and thereon I set out my carvings. They are for the most part also painted white. The earliest ones were made a long time ago, and some of these sculptures have never been exhibited. Others have been on show several times and an elite group have travelled to Ghana and back. 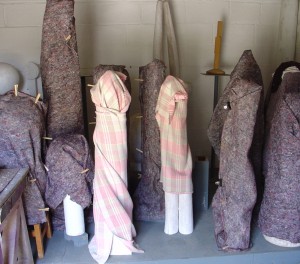 They are a crowd in this space and here they present more powerfully than they did as Band of Woods in my Huddersfield exhibition (which was, in any case, only a selection). In the stable they jostle one another. Some carvings lean against their neighbour. Many are covered, hidden under grey cotton blankets, protected from the light and dust. The completed carved sculptures spend their retirement on the dark green stages. There are about fifty pieces (one for every year – neat!)

Standing there I am confronted with millions of chisel marks. All together they are an overwhelming and an uncomfortable gathering of unsold, seemingly under-appreciated works. They appear to be somewhat resentful at being cooped up and disregarded! But I look upon these posterities with great affection. I don’t suppose that I am the only sculptor who says goodbye to his work when closing the studio door.

My objects exist mostly in the dark (as do Lobi shrine carvings). They have apparent histories and they are made to have a voice – to express or to hint. But what do they whisper to one another in the blackness? The carvings move to and fro – cracks open and splits occur as the wood dries out. Most of the wood that I used was green and therefore soft and inexpensive, all except for the wonderful walnut. The splits open in the heat of the hottest summer days, almost as if the carvings yawn. In the winter they close up again. The sculptures gather themselves together and huddle closer to face the frost.

I added electricity to the former stables and also some boards to line the plank wall on the inside. Until recently, I had stopped the improvements. Now I have put up a ceiling to insulate the roof and retain the warmth from a couple of Halogen heaters. There are no windows in these spaces; except in the heaviest downpours, the two doors stay open during working hours. Traffic between the workshops is considerable. The tools that I need are very often in the place where I am not. My neighbours at Chapel Plaister describe me as the Weatherman, every now and then emerging from one door or the other. Generally though, metal work is undertaken in one location and casting happens in the other. I used to carve sculpture in both places but since my thumbs became painful this is no longer on the agenda.

It is a cold place in the winter. The water tap is a little way off, but I manage with a mini water butt. There is no toilet. However I am surrounded by three dwellings that would serve very well in an emergency. So far there hasn’t been one. Beyond these houses there is a grassy area with a pond, a site where caravans park on summer weekends. I see little of the people who surround me, permanent or casual, but Graham and James are not too far away and always willing when I need them to help me lift or move things. 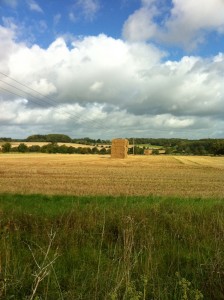 Over the last decade I have witnessed the development of the former farm. The barn has been made habitable as ‘The Barn’ and the outbuildings have been transformed from ramshackle and hazardous destructions into an enclosed L-shaped terrace. These renovations have been carried out with care and a great deal of sustained hard work by my landlord. My studio at Chapel Plaster is now within a triangle of three houses each with a garden, hence all with places to site my sculpture.

Behind my studio is the house where the Jenkins family live; Cameron Jenkins is my musical friend, and his three children are my Bell Band. Beyond this settlement towards the main road is the Chapel proper (open to visitors on Wednesday afternoons) and in the other direction is an airfield. On fine Saturdays especially, single-engined aeroplanes come and go. Pilots and passengers land for a cooked breakfast at the Sunflower Café situated at the end of the runway. Afterwards the little planes rise into the empty blue sky, flying away to destinations unknown to me. 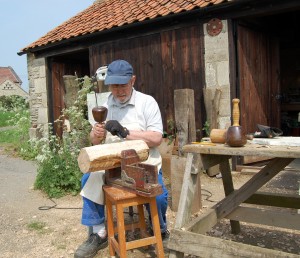 These are two spaces that have served me well. Whenever possible I have worked outside on either the banker or the bench that stand on the few paving slabs that make up my ‘patio’. During the last five years I have worked at Corsham, and Chapel Plaister (Plaster) has been upgraded to my summer residence and the place to make small bronzes.

Perhaps the best thing about working there is the fresh air, being under a big sky and very close to trees, fields and grazing sheep.

Kiln cooking for a bronze pouring

I love to be in and out, with a kiln outside and a furnace inside, pouring bronze in one place and fettling bronze in the other. A process with numerous intermissions that allow for drinking mugs of tea and sitting in the sunshine.

Thus work continues at Chapel Plaister. It is a triangular endeavour, physically as well as intellectually. Making sculpture does not happen as a straight line: idea + material = sculpture, but as Dalwood once described this process to me, idea + material creates an object that reflects back on the idea. This stimulates refinement. Repeat as necessary to arrive at Sculpture. 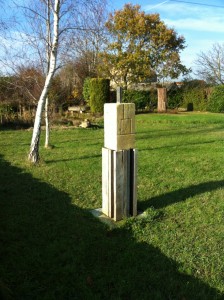