On our way home from the Buddle School my friends and I bought cinnamon sticks at the chemist’s shop that was situated half way down Station Road. We lit them and smoked them as we walked home.

In the holidays between Primary and Grammar schools I asked the apothecary whether he could give me a job. I think I told him that my ambition was to be a chemist. Where did that come from?

To everyone’s surprise I was taken on, but why my father and grandparents thought I was unemployable I don’t know. However, at aged 11, it was probable that I was a bit young to be a wage earner. Someone must have been on holiday. For a fortnight (and for 10/- each week) I spent my time cleaning. In particular, I washed large blue-glass bottles stacked on high shelves. A second job was mixing ointment. This was my introduction to a mortar and pestle (and arm work),  grinding the magical ingredients into a smooth paste seemed to take forever. Those two weeks working in the back of the shop, put an end to my aspirations to be a chemist.

Between Grammar School and Art School I had a job near Berwick-on-Tweed, on the border between England and Scotland in a place well known for Turner’s painting of a partly ruined castle, – Sunrise 1845. I made a drawing of the remains of Norham Castle in my new sketchbook. I had taken it with me to prepare for Art School; it was the only drawing I made. I was too busy working on farms, cutting down thistles and harvesting, building ‘stooks’ from sheaves of corn, and for a short while feeding pigs (while being pushed and shoved by them in all directions!). My reward as a pig-man was fruitcake (with dairy butter!) and the occasional rabbit caught in the fields as the corn was cut. Rabbits were skinned and cooked back at our camp and made into an evening meal for my group. I was with older students from Holland, among them a blonde smiley girl. I worshipped her from afar and was mercilessly teased when close to.

One sunny day in July 1955 I stood despondent in the centre of the industrial landscape of South Tyneside. I had gone there with Charlie Plant, also an art student, to search for holiday work. It was Charlie who taught me to roll my own cigarettes, using liquorice paper. We had knocked on all the doors but without any success. Miserably I made my way back to Sunderland, and as a last resort approached the Council Cleansing Department and the office of Mr Henderson, the Yard Manager. I asked, “A temporary job for a student?” Stern but fair, I thought, iron grey hair – short cropped, wearing almost rimless glasses with a brown storeman’s coat over his suit. That I was working my way through college appealed to him, he seemed impressed that I was prepared to take on labouring to pay my college expenses. He gave me a start – Monday at 7 30.

I began as a road sweeper, with a mate to keep me right, pushing a red and yellow dustcart, carrying two square bins and two brooms, all on two wheels – up and down cobbled back alleys, brushing up dog shit with my enormous broom. On hot days I wished for a rain shower to flush the gullies and keep down the dust and counteract the smell. After two weeks of sweeping I became a stand-in for bin men on holiday, a replacement on the team of five (four pan men and a driver), that manned the dust carts, also with red and yellow paintwork being eaten away by rust. These Bedford trucks were low, with a long semi-circular body and three sliding panels, front, middle and rear, on either side – we emptied the dustbins into a galvanised tin bath. Two men carried this ‘pan’ by the handle at each end and in tandem swung it up to the rubber rim along the side of the wagon and tipped the contents into the interior, making clouds of ash. To save time on journeys up and down garden paths, we tipped two or even three full bins into the pan. This became heavier and heavier and something of a struggle for me to keep up with my more experienced partner on the other handle; to swing, lift and tip the load up and over into the lorry. 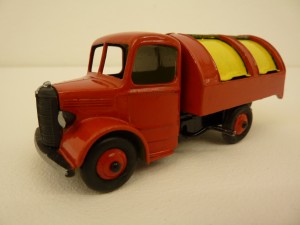 There were still ashes to be collected during the Northeast summer. As well as the domestic dustbins, we cleared unmentionable rubbish from behind shops to earn extras; a couple of pork chops each from the butchers, or a carrier bag full of carrots given to us by the greengrocer.

Each team had a route, known in every detail. On Fridays, as soon as we finished our quota, the week’s work done, we were off home, often by lunchtime if all went well. That morning we ran between the houses, filling the pan to the brim, very heavy lifts; a big finish to end the week. 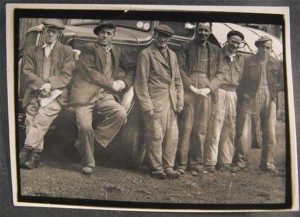 Several of the men I worked with had fought in the Second World War, quiet men who worked steadily, friendly but with little to say and nothing at all to say about their wartime experiences. Men like Charlie Edwards who, coincidentally, lived across from our prefab in Saltburn Road. His was a brick Council house, he lived there with his wife, daughter, dark-haired Audrey and young son. We both earned the same, just less than £10 a week. He was a man I wished to emulate then, I reckoned Mr Edwards was a success, to have a home and a family. My respect for the men I worked with was boundless, I was aware that because of them I had been spared the unspeakable horrors of conflict, I knew I was in their debt.

Employed by the Council again the following year I was promoted, moved on to the real hard labour – salvage. Working in the big shed baling paper, I earned an extra penny an hour. Newspapers were shovelled mechanically onto a belt, anything that was not paper was removed as the belt travelled upwards carrying the waste into the hopper of the baling machine, squashing and squeezing, compacting large blocks of pressed paper to be tied tightly with wire. The bales were stacked high in the shed awaiting their twice-weekly collection. Waste paper and rags, glass and metal, provided us with a bonus; all the men working in and out of the yard were entitled to a share of the money made from the salvage. This arrangement was a great incentive for Sunderland bin men to pick the town clean. Working for 10 weeks I was paid a very welcome £6 windfall. Hard work it was, but because it was earning money, the baler never stopped, at least during the 11 hour working day – our breaks for food and drink or anything else were very short. Slowing the belt or holding up the work rhythm was met with a tirade of expletives; curses and swear words I had never heard before! I began this job by sorting on the belt, removing bottles, rags, woollens into their appropriate containers. I even had a spell of tying the baling wire; pull hard and twist at exactly the moment the machine pressed most – miss that second and the squashed paper stayed loose and the bale collapsed.

Upgraded once again, I was told to start work even earlier. At 7am I would ride a lorry down to Sunderland Docks, my extra job was to help empty the pigswill from incoming ships. Large steel containers were  lifted by crane out of the hold and guided by me, wearing Wellington boots, so that the contents gushed out onto the flat bed of our truck and not the quayside. This was the dirtiest job.

I worked for Mr Henderson at Easter and summer for four years, at that time his only student. On the morning of my very last day and for the first time, I missed the bus and I was a few minutes late. Mr Henderson had assembled all the men in the yard before they set off to work. The short speech Mr Henderson made acknowledging my departure was prefaced by a reprimand, that being late for work would not be tolerated!

The week I began Art School I also started a Saturday job. They were not so commonplace then as they are now and not at all easy to come by. For 10/- a day, from nine to six, I worked in the clothing department of a store called Liverpool House in downtown Sunderland. I was employed in an annexe across the street from the main building, a place that in all the time I worked there, I never entered. I was in Men’s Clothing, but actually selling school trousers to mums; coarse material, dark colours but very hard wearing, I used to say!

It was working here that I met my first wife; she occasionally appeared on the shop floor, down from Finance, an office in the building across the road and three stories above me. In my naivety I ignored the many significant indicators that told everyone else, except the participants, that this relationship was doomed. Decisions, options, choices were driven not by sense or anything practical, but by hormones, testosterone and lust.

As a salesman on Saturdays I wore my grey double-breasted suit, bought for me by my grandmother at the Co-op, it was so awful and inappropriate for a callow youth that it must have been an irresistible bargain. On weekdays I wore a duffle coat, I dressed and acted as I supposed an artist would.  My wages every Saturday bought me a packet of Abdullah cigarettes, expensive, but I liked the packet and the smoke, plus a quarter of a pound of chocolate macaroons, both from the same shop on my way to the pictures. Weekdays I would smoke brown roll ups and go to the pictures on Wednesdays. My Saturday girlfriend stayed the same, but midweek it would be Betty, Joyce, Carol or Judy.

For ten days before Christmas I was driven around all day in the back of a Post Office van – no room for a student in the driver’s cab – squashed amongst innumerable bags of Christmas cards that I had collected from sub-post offices around Seaburn. The Christmas Post was another annual event that began in Sunderland and was carried on in London.