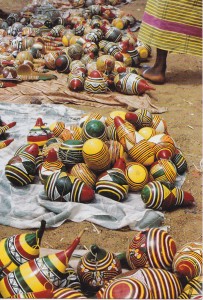 I have had many reasons to be grateful to Southern Arts, whose Regional Arts Council offices were once situated in Winchester. During the seventies, eighties and nineties it was an organisation that supported me in my numerous activities. The Arts Panel funded my exhibitions of sculpture and awarded me a Travel Bursary that paid the expenses of my research trip to New York, Philadelphia and Washington. Southern Arts also bought a sculpture: a wood carving, Walnut, chosen by Art Officer Margot Coates. She unearthed this from the corner of my Pound Pill studio – not one of the sculptures I had put on display especially for her visit. I was paid £250. I have always thought this was a very perceptive choice because it was my first carving from a tree trunk, (since I had been a student at Sunderland) it was not made from wood that had been planked and glued. 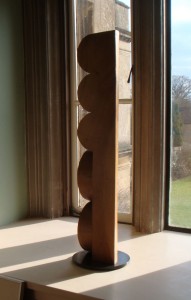 At some later date Hugh Adams, when he was Art Officer at Southern Arts, asked me to exchange this walnut wood carving for another work; Walnut was not his choice, nor his favourite. He preferred a stone carving, Head with earrings. This was included in the exhibition Creating a Vision at the Russell-Cotes Art Gallery and Museum in Bournemouth in 1994 and afterwards the sculpture went into their Collection. In retrospect, a good exchange. The walnut may have been less popular but it is a better sculpture than the more decorative stone carving. I gave Walnut to Jo Giles some years ago. It was recently on loan to BSU at Corsham Court for the exhibition Made in Corsham.

Marilyn Carr (another one of the several Art Officers at Southern Arts that I worked with), bought a framed drawing in 1982 – Drawing for a walnut carving. We met up in a car park in Oxford and just before handing the drawing over to her, I broke the glass. This was a joint purchase by Marilyn and Bob Carruthers, who was a long serving supporter of Southern Arts. Bob worked in the Life Room at the RCA during my first year there – a former student who assisted Prof John Skeaping with Memorial, Skeaping’s great granite carving. I believe in my day he was a tutor, but I can’t remember receiving any words of wisdom from him, however I was impressed by his ambition for the Rodinesque, large scale work in clay that he appeared to battle with, day after day.

It was a grant from Southern Arts that made it possible for me to buy my ‘Big Brown Shed’, a studio that deservedly has a chapter all to itself! In 1984 I was given a sabbatical term from Bath Academy, in order to work on three commissions – sculpture for public places. A trio of carvings organised by Hugh Adams, all three works were part-funded by Southern Arts. First was Spring a large beech wood carving made for the John Creasey Collection of Contemporary Art at the Main Library in Salisbury. Next was Family, for The Corsham School, carved in Portland stone (with the help of Barry Baldwin, made during a cold winter in his Stone Yard at Potley in Corsham). And finally Sculpture and Sculptor, a self-portrait for Wiltshire Library Service. 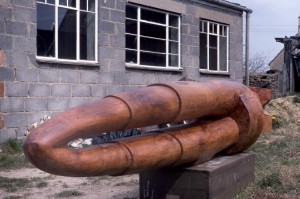 The mid-eighties were very productive years. Sculptors took encouragment from the numerous Open Air exhibitions held in parks in Bath, Canterbury and Wimbledon, and at Yorkshire Sculpture Park. This was a period when I made several large carvings, mostly of walnut from the Atworth tree. Few of these sculptures have survived, although Walnuts remains safe in the Ivor and Bridget Heal collection, and Spring reclines somewhere in Salisbury.

There was an almost-but-not-quite major purchase by Southern Arts at this time. A hospital in the Isle of Wight was looking for a large sculpture and a Southern Arts representative visited my studio in Atworth. He was very taken with Spike, a tall carving made initially for the Sculpture on the Map exhibition at Canterbury. He actually committed to buy it. I was bitterly disappointed a few days later when the sale was cancelled; the agent had over-reached his remit. 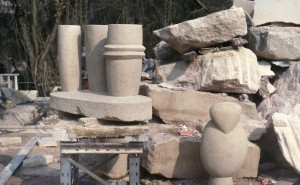 For several years I served on the Art Panel of Southern Arts, a small group which had the responsibility for the disbursement of public funds for art and artists. This was an undertaking made memorable by the parade of representatives from the Arts Council in London; Nick Serota, Richard Francis and David Elliot. Three young men were sent out to the Regions from headquarters at the Southbank, to learn their business; all of them inscrutable observers. Dishing out public money was always difficult and I was usually reluctant to take risks. I was all for contemporary sculpture everywhere, but mindful of ‘value-for-money’ and ‘money well spent’. The tendency was to support those who were known to be capable of doing a good job.

The organisation’s valued magazine was Southern Arts. At Theresa Gleadowe’s invitation I wrote about Wilhem Lembruch. Well, more in praise of Lembruch, ‘the sculptor of pathos’, whose work at the time could be seen in a large exhibition at Portsmouth. This was a commission that we discussed when we had a pub lunch together. It was quite unusual for me that, as a married man, I had taken a beautiful woman, to lunch.

For a long while I was supported by the inestimable David Kay and the Crafts Panel, particularly when I came to work on LOBI, an exhibition that included pottery, textiles, woodcarving, jewellery and metalwork. LOBI toured in the Southern Arts area.

I have written elsewhere about the Lobi people of West Africa but not about the exhibition LOBI. This was an outcome of my several expeditions to Africa and a collaboration between BSU and Ghana Museums & Monuments Board, essentially between myself and Prof Joe Nrkrumah.

The container was loaded at Sion Hill outside my office/studio – many of the objects to go were packed in customised crates and boxes. The plinths and the specially designed exhibition stand were wrapped, protected and prepared for the journey. LOBI, an exhibition designed and built by Bob Fearns, Geoff Hawkins and me, had already travelled to seven venues in the south of England. As well as the constituents of LOBI, there was another exhibition to be shown in the adjoining Art Gallery at the Museum in Accra, Michael Pennie: Sculpture and Drawings. In all, the big steel container was a cornucopia of Art, each item loaded with care, the final part of weeks of preparation and refurbishment. 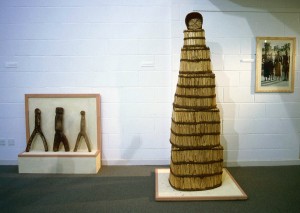 It was a great relief when the shipment left Bath, and then England, and all my bits of wood had set sail for Africa on their splendid enterprise. I welcomed the few days of respite before I was to join LOBI and my sculpture with Joe Nkrumah at the National Musem and Art Gallery.

Five days after the cargo had set sail I had a phone call from the shipping company. “Do you want the good news or the bad first.” “The good.” I said. “Well, your container has arrived in Africa.” “And the bad?” “It is in Guinea not Ghana!”

The re-organisation of the Arts Council in 2002 – from Southern Arts Association to the South West Region of Arts Council England – changed the close and accommodating provision to an arm’s length and more impersonal relationship. Nevertheless my touring exhibition, featuring innumerable small bronzes Across the Board + 2 Other Sculptures, was generously supported by the Arts Council South West in Exeter (and also by The Henry Moore Foundation), the exhibition was given the support that was required to show the work in several public spaces with free access for all.