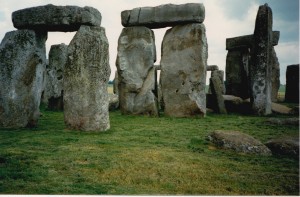 Not too long ago I made a complaint to a young woman who was promoting Salisbury Festival – she was standing outside Waitrose in Salisbury, handing out programmes. My grumble was that there were fewer and fewer Visual Arts events happening during the Festival than in  years gone by. In Salisbury, Art was becoming a diminishing presence. Plenty of music of course, theatre and other performances, literature – celebrity writers talking about their new books and several children’s events. There was only one exhibition at the Arts Centre that year, something of broad appeal, but neither distinguished nor adventurous. This current programme contrasted markedly with the seven-year period (1993-2000) when Helen Marriage, as Director, transformed Salisbury Festival. The audience figures increased massively and the Festival gained for itself an international reputation. Add to this the commitment to sculpture of Annette Ratuzniak and the curatorial excellence of Theresa Bergne, Salisbury was, for at least a decade, an outstandingly exciting venue for art, artists and an ever-expanding and appreciative public. The In Praise of Wood exhibition saw my carvings inside Salisbury Cathedral, a group of woodworks called Assembly, white against the mosaic of the tiled floor. To open that event Sir Edward Heath gave an intelligent and moving speech – emphasising  the importance of the arts in a balanced society.

The demise of the Visual Arts in both the Festivals that I have spent time and energy working for – Bath International Music Festival and Salisbury Festival – is not too difficult to comprehend. We have a laudable tradition in Britain that art galleries are free at the point of entry; the collections and many exhibitions are also free to view. Whereas tickets to a concert or the ballet, the opera and the theatre, are not without charge. On the contrary, admission is usually expensive. With the exception of London blockbusters at the Royal Academy for instance, art exhibitions do not make money. They are costly to arrange, and frequently the better the artist the smaller the audience – unless the artist has been dead for a while. Gallery and Museum cafes and restaurants, as well as shops selling books, catalogues and postcards, are all relied upon to create income in an effort to balance the accounts. 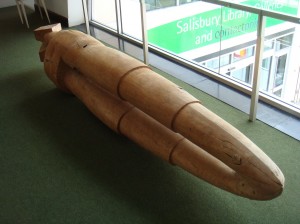 Contemporary Art languishes in the two festival locations closest to my own creative hub in Corsham. At the same time signature art galleries open in Margate and Wakefield, a pity then that Bath does not need regeneration – it remains a museum city shackled by its own history, forever mired in the Georgian era. On the day of my conversation about Salisbury Festival we had been to Roche Court, home of the New Art Centre at East Winterslow – east of Salisbury towards London. Marlene and I had been to the Opening of the exhibition of new sculpture and painting by Michael Craig-Martin. Under very grey skies we gathered in the garden with others like us who had travelled there by car, together with the ‘art professionals’ who had made the trip in two coaches from outside Tate Modern in London. I spoke with Michael about our short time together at Corsham. He was quick to acknowledge that he had learned a great deal from Clifford Ellis during his time at Bath Academy. The subjects of Craig-Martin’s sculpture in the exhibition were familiar, everyday objects, oversized and drawn in outline by painted steel: a hammer or an umbrella for example. These large scale works, posing elegantly against the lush green grass and the backdrop of the surrounding trees, would look good anywhere. However to my mind, although they are quite beautiful objects, they lack the edge and the uncertainties of Michael’s early minimalist works, made while he worked at Corsham. I was gladdened by Curator Stephen Feeke’s speech of welcome; he introduced Michael Craig-Martin as a distinguished artist and teacher. Undeniably Michael is that rare example of being top man at two seemingly contradictory jobs. Latterly I have come to acknowledge that I am also considered by others to be an artist/academic. However much I resist this label, I ought to admit that I have earned my living as a teacher for forty years, a working life in two parts and not yet in balance. To date, I have only been a full time sculptor for twelve years.

I expected that sometime I would have to write about the New Art Centre versus myself, sculptor. There are many aspects that I admire about this gallery. First among them of course, there are dozens of sculptures to be seen, to learn from. Among these are many good sculptures, not all of them, but plenty of worthwhile works sited in the garden and throughout the landscape. The gallery exhibitions are arranged in a space, though small, has a wall of glass that acts as an intermediary between the interior and the outside. The displays are well considered, thoughtfully arranged and always a visual treat, like Richard Deacon’s Orinoco. At Opening events  very polite young people greet the visitors, serve drinks and after the speeches, serve lunch. Then there is Madeleine, Countess of Bessborough OBE overseeing it all, usually with either a piercing gaze or a faraway look. There is sometimes a ‘Hello’ for me, but not always. This is a woman who knows more about British sculpture and sculptors than anyone else, sculptors working now, including: Laura Ford, Clare Woods, Peter Randall-Page and Des Hughes – artists who exhibit at the New Art Centre and who studied sculpture on my watch at Bath. I have made some sculptures that would look fine if placed in the informal area of Roche Court gardens, but that is yet to happen.

To me Salisbury Plain is very beautiful, but unhappily it has become less of a sacred space and more of a place to practise war. The presence of army personnel using tank training grounds and firing ranges has been for a long while, fairly discreet. Now that our country is ‘constantly under threat’ – barriers and forbidding red crossing signs and guard posts have appeared at intervals along the Devizes Road from Tilshead to Shrewton. Across Salisbury Plain is a familiar journey to me that I have made many times throughout my long association with the Cathedral city. Although not flat by any means, it is an area some twelve miles square featuring gentle undulating hills – ups and downs, a patchwork of rich greens. It appears an almost infinite landscape, the largest plain in England with low horizons and very big skies.

The Young Gallery at the Main Library in Salisbury has the singular distinction of showing all three of my African exhibitions – African, Lobi and West African Journeys and then later a fourth, Woodworks from Ghana and in 2015 there is to be a fifth exhibition, African and Related Sculptures. 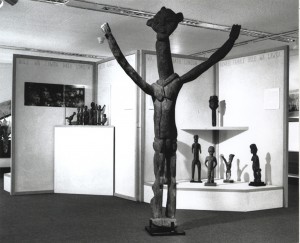 During the run of Lobi I was asked by Monte Little, one-time Head Librarian and Curator of The John Creasey Collection of Contemporary Art, to give a slide-talk about my travels in West Africa. Unusually for a Library event there was a very small audience. When it was time to begin we looked outside to see if latecomers might be arriving. We saw only a commotion at the main door. More than a dozen protestors were marching around and around, brandishing placards while chanting Down with Black Idolatry – the slogan written on their boards. The protesters succeeded in reducing the number of people who attended my talk, but next day, to the delight of Monte Little, the demonstration was featured in the local newspaper. The upshot of this publicity was that the attendance to the exhibition was exceptional. 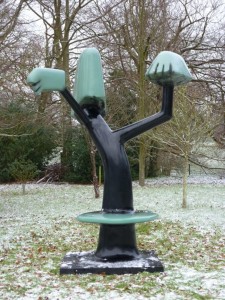 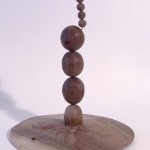 At Corsham Court, Kenneth Armitage was Head of Sculpture at Bath Academy for a decade from 1946. How did it come about that I arranged for Richmond Oak to be sited at Sion Hill in 2008 and then at Corsham Court in 2009? It was a generous agreement between the Trustees of the Armitage Estate and The New Art Centre at Roche Court. I organised that the University build a concrete plinth, prior to installation, which positioned Richmond Oak with a panoramic view of the city and where the sculpture could be seen from the Head of School’s second floor office window. Richmond Oak was happily sited there for a year until it was toppled, but not literally. Prof. Ron George moved to Corsham as Head of Centre of Postgraduate Studies and Pradeep Sharma took over at Sion Hill. The new Head of School asked me to remove the sculpture to have it taken back to Salisbury; I was instructed to return Armitage’s Richmond Oak to Roche Court. I was very unhappy at this turn of events. In truth, I was angry at the rejection of this splendid sculpture and the dissing of my (and others’) considerable efforts to place this work at Sion Hill. I argued for Richmond Oak to come to Corsham Court. Eventually this was agreed between Prof. Ron George and Pradeep Sharma, and James Methuen-Campbell, the present incumbent of the Court. Presently the sculpture is now sited in the Pleasure Gardens at Corsham Court.