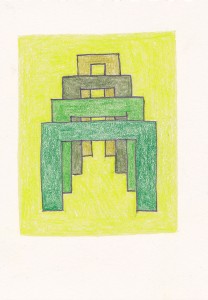 Across the Irish Sea

With my mother, my brother and I were shipped to Belfast, my mother’s home city and family place, while my father continued working (as an Electrical Draughtsman) on the conversion of cruise liners to troop ships, at Harland and Wolff’s shipyard in Liverpool. Embarking, I was confronted by a wall of grey steel as high as I could make out – the ship to take us across the Irish Sea. Clearly someone in my family thought Belfast a safer place than Liverpool in the early 1940s.

My Christmas present in Northern Ireland was a Balsa wood model airplane, unhappily I dropped the orange that I had discovered in the bottom of my Christmas stocking, onto this fragile construction, smashing the tailplane to smithereens – neither the plane nor my Christmas took off after that.

Janet was my mother’s sister. Charlie, her husband, was a builder. They lived in a large house in Finaghy. In those days it was a small village in the Balmoral district of Belfast, apparently without pubs or betting shops. Although we lived there for some months I remember nothing of the interior of the house except it seemed dark and quite empty. I do recall that if we stepped out of line, his children, as well as my brother and I, would suffer a sharp rap over the knuckles from Uncle Charlie’s wooden ruler.
Time and again it is the painful that is remembered. On V-J Day in August 1945 on the beach at Portobello I was badly sunburnt and at sometime in Finaghy, I suffered from scabies, a nasty, itchy, red rash.

I was drawn to the Italian prisoners-of-war confined behind a wire fence at the bottom of the garden, even though this was a place that was strictly off limits. The men made wooden toys but I had no money to buy them, and I suspect it was one of them who had constructed our Christmas aircraft.

We also lived for a while in Belfast above the family fish and chip shop. Here I began to draw, pencil drawings that filled both sides of every page of a lined note-pad. They depicted Mickey Mouse – Hero – enacting numerous scenarios. I sent the pad to Walt Disney, posted to Walt Disney Hollywood, to be exact. Some weeks later a letter from America thanked me for my drawings, advising me that a still from The Three Caballeros, the 1944 Disney movie starring Donald Duck, was on its way to me across the Atlantic. Showing-off, when this prized possession arrived, I took it to school, and to my dismay it was pinned to the classroom wall and was still there when I left Belfast some weeks later. But it was exactly this response to my drawings that sowed the seed of my ambition to be an artist. From then on I believed I was good at Art – I wasn’t, but that didn’t matter and anyway it took me a long time to find out. 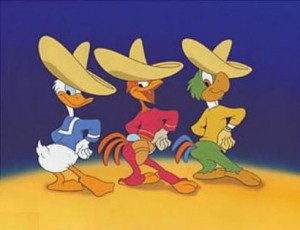 My schooldays in Belfast were not the happiest – I was unpopular. Firstly because I was English and secondly, through no fault of my own, I was ahead of the class. In short, I knew too much and had not yet learned to keep my need to impress under control. At ‘play’ time I was sometimes pushed against a wall, pinned there by my classmates who demanded “Protestant or Catholic?” I had to choose one or the other, even though I had no idea what the words meant. I usually picked the wrong side and got pummelled and spat upon as a result.

It became clearer to me which crew I was a member of, when, not knowing why I was doing it, I marched with the Orangemen in their July parade, walking between the bands and the banners amid the clamour of proud celebration. I was striding alongside my mother’s father (I did not know him as a Grandfather, nor do I remember his name). 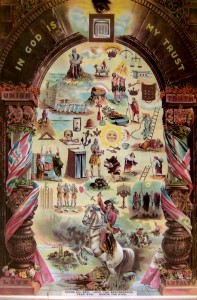 To my mind Belfast was a violent city, even then gunshots were occasionally heard, particularly during elections. But being in Belfast had its rewards; I had twelve hour access to either fish and chips or a corned beef pasty and chips. There was Potato bread and Soda bread, and Belfast was where I ate my first banana. And there were always enough pennies that would permit my brother and me to go to the cinema. This was our reward for taking out the eyes from the peeled potatoes waiting to be chipped. I think I was nine when I lived at 52 Hollywood Road (yes, that was my address), a short walk from an Odeon Picture Palace, where before 4pm tickets were half price. George and I would rush home from school to go to the cinema; we saw Gone With The Wind for a sixpence.

One day I climbed up a lampost to cheer General Dwight D. Eisenhower, being paraded in an open-top limousine, it was illuminated from within (presumably for the film crews). The great man was proceeding unhurriedly along the drive to the Parliament Buildings at Stormont – but I was too close and quite taken aback to see this distinguished soldier, destined to be the Thirty-fourth President of the USA, wearing makeup!