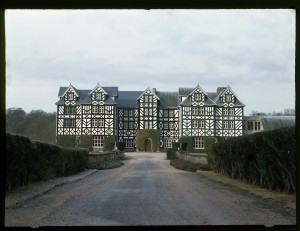 Having fallen out with my wife, I left Pound Pill for a trip to London, driving my van. It was a cold December day and Christmas  was not far off. At Thatcham I broke down – the engine spluttered and stopped, but very conveniently, outside a garage. I had to leave the van there for engine repairs, giving me no choice but to return to Corsham.

A sympathetic merchant sailor, who was filling up his little car at the pump while I was discussing my problem with a mechanic, offered me a lift along the A4, I accepted this kindness. It was mid-afternoon when we passed through Marlborough, minutes later a front tyre burst. The car slewed across the road, it was hit by an oncoming lorry and bounced onto the opposite grass verge. Before losing consciousness my last memory was protecting my face against the exploding windscreen. Driver and passenger were both injured. I less seriously; broken nose, cracked ribs, lots of facial bruises and my hands were lacerated by fragments of glass and I was suffering from shock. All this became slowly apparent when I woke up in Marlborough Hospital.

My first trip to the bathroom, after the accident, was painful to say the least. When I eventually dragged myself to look at my reflection in the mirror, I had to hang on to the washbasin to save myself from fainting. I shrank back in horror at a monstrous yellow-green and black-blue face, bruised and swollen beyond recognition. This was someone I did not know. Little wonder then, that when my young children came to see me the next day, they screamed with fright and had to be taken out of the ward.
I was kept at Marlborough until well after Christmas, waiting for the minor operation that would return my nose to the centre of my face, this was to take place in Swindon. It was John Hoskin, driving his beloved mini-van who took me there, a cold, dark but thankfully short journey. I was very nervous to be a passenger again, so John drove with uncharacteristic care. My bed was in an empty ward, on the last day of 1964, a solitary patient.

While I was recovering in Marlborough, my brother George and his wife Joan came from London to see me, my sister-in–law bringing me books. Travelling People by B.S.Johnson was the best one. An autobiographical novel recounting the adventures of a young man and his girlfriend travelling in Wales. One of the pages was printed completely black, another had a small rectangular hole cut into it, so that the reader could see the word ‘death’ some pages further on, prompting a peek ahead, and thus giving the game away. Was that the writer’s intention?

Travelling People was my introduction to Brian Stanley Johnson. He told me, when we became friends, that he used his initials BS, rather than Brian, to make a distinction between himself and the singer Brian Johnson, who was popular in the early sixties, and I believed him! I bought his other novels, (there weren’t that many) and I had read them, before I met him at Gregynog.
Gregynog Hall was the former home of the sisters Gwendoline and Margaret Davies, grand daughters of David Davies, a Victorian tycoon whose wealth had come from coal and timber. The Davies sisters are best known for collecting the 260 Impressionist paintings that became the heart of the National Museum of Wales. The Hall was a bequest from the Davies family to the University of Wales in 1963 and became the Centre where courses from the several University colleges   would come together from time to time. 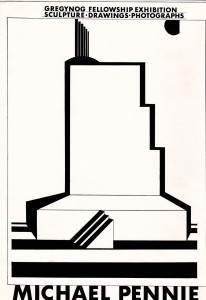 I was at Gregynog as one of a short list of candidates being interviewed for the newly established Gregynog Fellowship in the Arts – all the Arts – music, literature and the visual arts. Over that long weekend Brian and I talked almost entirely about Bath. He had just completed a film for the BBC‘s Monitor programme about the Georgian city, then as now, in peril from its traffic problems. So I had the distinct impression that he was a filmmaker. It was not until our last hour at Gregynog, mid-morning on Sunday, having coffee before going our separate ways that Peter Porter said to me, “In the sixties, having an advance before a book was published in order to finance the writing, was very unusual, so Brian is an exception.”

You could have knocked me down with a feather. It was incredible that I had spent the weekend with the writer who had been my serious reading for the last year or so, without knowing it! There was only time for me to make a deferential re-introduction, before setting off in my Peugeot 403 back to England. I had left the ‘interview’ – a process that had actually started on Friday afternoon and continued all day Saturday and Sunday morning – convinced that I would never see Gregynog again. I was glad to have had the weekend with such an interesting group of people; Gillian Ayres, the painter who I knew from Bath Academy, Peter Porter, poet, Richard Llewellyn, the author of How Green Was My Valley, who at first I thought was a member of the interviewing panel, sculptor Jonah Jones and film maker and writer B.S.Johnson. The formal interview itself was reasonably pleasant, led by David Tinker of Aberystwyth, an associate of Malcolm Hughes and the Systems group. He was clearly for a visual artist and particularly supportive of a candidate who was on a similar wavelength.

On Monday, the day after I had returned home, I had a phone call from Warden Glyn Tegai-Hughes. He asked me if I would accept the Second Fellowship. I said, ‘Yes.’

We were appointed together, B.S.Johnson was First Gregynog Fellow in the Arts, nine months later I followed him. Discussing the selection process with the Warden some time afterward, he did admit that the two Johnson children and then the three Pennie children were a considerable boost to the numbers attending the village school, as well as supplying other footballers to play the game with his two sons! 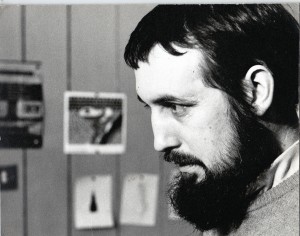 In the warm dry studio that was provided, I worked hard every day. Eating with the students and staff of the visiting courses,   having breakfast, lunch and dinner in the Refectory. Although very active, walking up to the Hall and back again to the Cottage where we lived, I put on weight.

I enjoyed my Reader status, meeting academics, writers and the Methodist Council and working in a grand house full of art, beautifully appointed and alcohol free. This last was a condition of the gift, I think, much to the chagrin of John Wain, a weekend visitor. He was at the Hall to give a lecture on Samuel Palmer. He had recently published A Winter in the Hills, and was, when I met him, resting on his laurels.

I listened to lectures, I was a guest at seminars and watched films with the students and staff of the Forestry, English, American Studies and Law Courses from Bangor, Aberystwyth, Cardiff and Lampeter, the several colleges of the University. I became friendly with Emyr Humphreys, a regular at the Hall. He bought several Hot Tops, small plywood sculptures in the shape of a ziggurat that I had had made for me in an edition of 50, especially to be sold in the Gregynog ‘Tuck Shop.’
Emyr Humphreys described his creative process to me, as beginning as ‘an irritant’ that became more and more uncomfortable, until it had to be dealt with.

During my Fellowship, the Library was fitted with new shelves and I was given the off-cuts, lengths of inch thick oak planks. I used the wood to make a rising construction of overlapping boards, glued and screwed. Working with this oak was a pleasure, warm and clean and it smelled good; a contrast to the wet and cold casting process, this was a new world of making for me. The beginning of more than forty years constructing and carving wood. 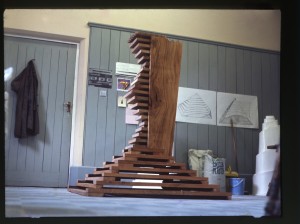 The Studio Gregynog and Vase

During this year I had kept some contact with Bath Academy of Art and on my few trips to Corsham I transported the work I needed for my first show at Angela Flowers Gallery, from English studio to Welsh studio, for completion and finishing. My year concluded with exhibitions in London, Cardiff, Gregynog Hall and Bangor and the sale of Bishop, (a good sculpture), to the Contemporary Arts Society of Wales. 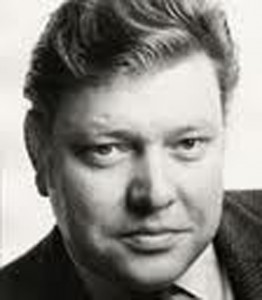 At my invitation Brian visited Bath Academy, to show and discuss his short films, an event that took place in the local cinema.

Brian wrote: Paradigm : “The film is a paradigm (exemplar, demonstrative example) of one view of the writer’s condition: the older you get, the less you have to say and the more difficulty you have in saying it. By extension, it is also a paradigm of the human condition.”

On that visit, staying with me at Pound Pill, Brian and I made time to sign the edition of our screen print – A work for the first two fellows.1972

THE SUCCESSION OF LIFE THROUGH GEOLOGICAL TIME, HMSO 1961 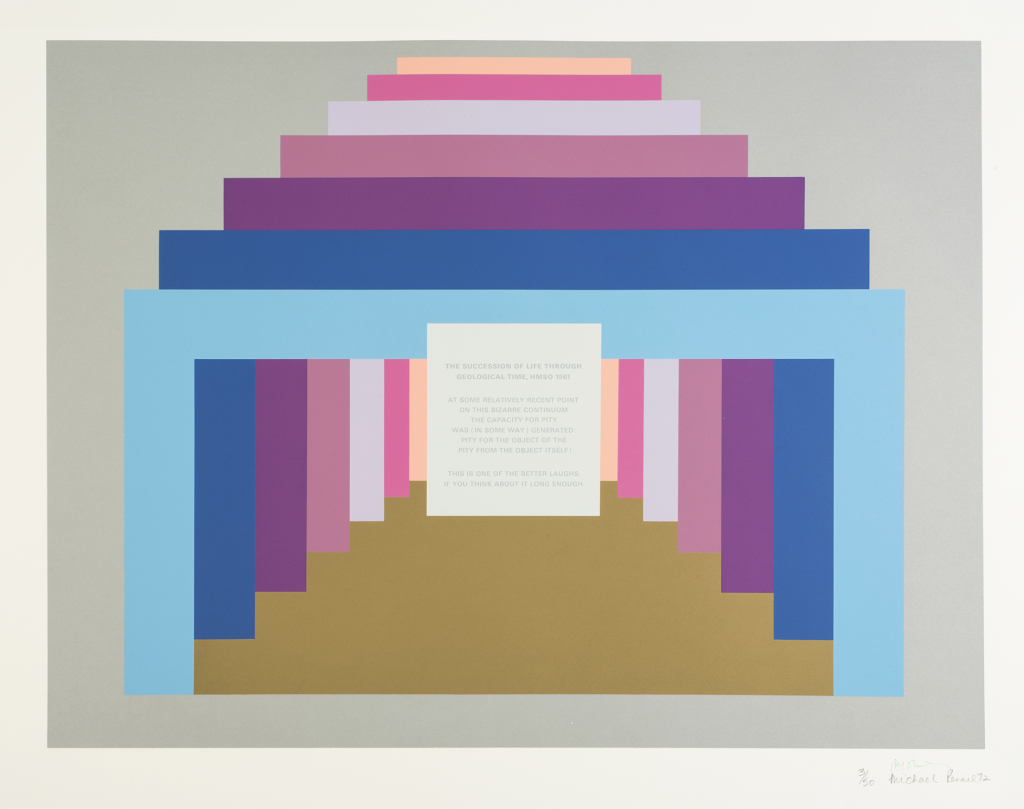 AT SOME RELATIVELY RECENT POINT

ON THIS BIZARRE CONTINUUM

THE CAPACITY FOR PITY

WAS IN SOME WAY GENERATED

PITY FOR THE OBJECT OF THE

PITY FROM THE OBJECT ITSELF

THIS IS ONE OF THE BETTER LAUGHS

IF YOU THINK ABOUT IT LONG ENOUGH