I have written elsewhere that my first encounter with Glynn Williams was in 1961. We were carrying our sculptures up the steps of the Commonwealth Institute in South Kensington, our submissions for the Rome Scholarship.

I won the Scholarship, a residency at the British School in Rome for two years and Glynn was awarded the Gulbenkian Scholarship, a residency for one year. As it turned out the reverse happened. I was in Italy for one year and my early return home enabled Glynn to stay on for another year. He was commissioned to carve Roman stone – Travertine – a sculpture to stand in the garden of the British School. During my scholarship, although I was living in Anticoli and Glynn’s studio was at the School in Rome, we did get together, either at his place or mine.

When I made the dreadful discovery that there had been no transfer of scholarship money from Lloyds Bank in South Kensington into my new account in Rome, (my bank in Rome was at the bottom of the Spanish Steps), it was Glynn who loaned me enough lire to survive while I was waiting for my money to arrive from London. We were both for sculpture and both from the North: Sunderland v Leeds!

The picturesque village of Anticoli Corrado, where the Pennies lived during that Scholarship year, attracted many Sunday visitors on a day out from Rome. First stop Tivoli for an early lunch, then Hadrian’s Villa and afterwards, along the valley with hill-top villages on either side, to Anticoli.

Heather Woodall, a fashion designer, came to see us at Via S. Rocco, bringing a friend from the British Council. On one such a visit she met Glynn, who was also in Anticoli to see us. They were married the next year; their two daughters Victoria and Sophie are immortalised in Glynn’s stone carving Sisters.

There was always a element of competition between us, we were both ambitious. Although our positions in regard to art and craft, as well as my association with Systems theorists and particularly my exhibition with Malcolm Hughes at the ICA, kept us at arm’s length. Glynn was teaching at Leeds with Patrick Hughes and other notables. As the city’s football team dominated football, so the Fine Art Course at Leeds dominated the Art School League tables.

Glynn and I would meet in London occasionally at an opening, then drink a beer or two. On these evenings out, up from the country, I usually drank too much to travel home safely and would eventually end up snoring on the Williams’ sofa. 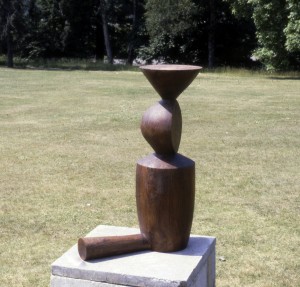 Glynn took on the Wimbledon job (Head of Sculpture) with Ken Turnell, and painter converted to sculpture, Lee Grandjean: a formidable trio, determined to ‘rescue’ British Sculpture from the threat of Conceptualism and from the attack by American Minimalism. I admired their passion, although I was not a member of that group. In fact, I was never a member of any group. In those days I was in the thrall of Bath Academy with a preference for the experience of Adrian Heath and James Tower, on the one hand and the Systems people – Malcolm Hughes and Michael Kidner – on the other. And central to it all, Robyn Denny, who I admired most. Besides, for a while I considered myself a Minimalist (without the theory), making formal work: black sculpture (like Tony Smith).

One evening in a pub somewhere in Soho, the Wimbledon three and I were joined by Peter Murray. He entertained us with his plan for a Sculpture Park at Bretton Hall – a scheme we greeted with a large measure of scepticism. However the idea of a Yorkshire venue, (for the work we were all going to make when the pub closed) had much to recommend it and we raised our glasses, while remaining doubtful of young Peter’s ability to pull it off. Wrong!

Immediately I returned from Italy Freda Skinner interviewed me at Wimbledon School of Art. She was good to talk to, a wise sculptor, who was also very kind and encouraging to a newcomer to teaching. She offered me one a day a week. This was before I’d been to Corsham, where I was to be employed on a Friday teaching sculpture and also a Saturday morning teaching Life Drawing in the Barn. I chose Corsham because I thought a small town in the country a better place than the city for my family, especially for Alison.

When I arrived at BAA in June 1962. Peter Startup was a visiting lecturer. Although outwardly friendly with Clifford Ellis, I had heard that there had been some tension between them and Peter would not be returning to Corsham in the Autumn. He asked me if I was taking up my Wimbledon days. If I was not, could he approach Freda? It was clear to me that, for whatever reason, I was in fact having his teaching time at Bath Academy. I said go ahead. I believe his years at Wimbledon were good ones. Peter suceeded Freda Skinner as Head of Sculpture until his untimely death in 1977.

It was then that Glynn Williams moved to Peckham to work at Wimbledon. His brief was to increase an application that had declined gradually in the face of stiff competition from the Inner London Colleges. St Martins and Central School had been building a strong reputation and were now dominating the Art School scene, especially for sculpture. The most ambitious students were going to central London schools. Glynn, aware of the current – rather explosive – dynamic at St Martin’s (under Anthony Caro and Alan Gouk), joined their group seminars and their discussions concerning sculpture post-Moore. By employing a slice of St Martin’s staff part-time, Glynn imported the St Martins ethos into Wimbledon. Peter Hide, Tony Smart and Charles Hewlings, abstraction in steel, taught at Wimbledon. Charles also taught students at Corsham. At the same time Ken and Lee, led by Glynn, taught the figurative part of their course – clay, stone and wood sculpture.

Robin Greenwood, a former student of Peter Kinley at Wimbledon, stayed on at the School together with Peter Hide and Tony Smart. Along with Katherine Gili they presaged the emergence of sculptures with the dynamic, if not the appearance, of a figure in action. Have You Seen Sculpture from the Body arrived at the forges in Merton, from the studios in Stockwell. The emergence of the Rodin plasters in the exhibition Rodin Rediscovered had some input here. 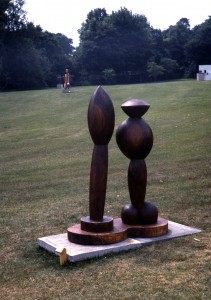 I believe Glynn saw sculpture as an enrichment. In his studio there were carvings I thought beautiful; of simple, graceful and elegantly drawn forms. For Glynn these served as a corpus for his Sculpture, a recipient for his very particular vocabulary that changed the formal dynamic into a more visually aggressive work.

At Wimbledon, the Sculpture Course was dominated by the three Cs – Casting, Carving and Construction – the pathway that led from early 20th century sculpture and the period dominated by Picasso, Matisse and Modigliani, (three artists who made great paintings and great sculpture) and of course Rodin and Brancusi. At Wimbledon in the early 80s sculpture was made from traditional materials and by traditional techniques; such as wood and stone, casting for bronze, and forged steel. Heat, smoke and noise – hammers on red hot metal inside the studios – and the outside spaces reverberating with the thud of mallets on chisels, cutting wood and stone; sculpture made on an ambitious scale.

At Glynn’s invitation I took part in a Wimbledon Crit, a day when teaching staff and invited sculptors were required to take a sculpture to the school for discussion. I took Somaplumb, a work of carved oak made with cylinders and cubes on extended carved rods, a compass-like structure pointing in four directions made up of basic building blocks; a very strange and awkward work, contradictive, both minimal and handmade. The history of its making; chisel marks, dowels and glue, apparent for all to see.

Just as I thought, the steel sculptures offered for discussion were uninspiring and no more interesting than steel works in the world. Somaplumb was savaged in the Crit, my more modest work was considered banal, made without the temper required to hammer and forge. My work, that had been carefully and thoughtfully constructed, was out of place on that day, like a tooth pick in a cutlery cabinet.

Every year the School arranged an exhibition of staff and student sculpture in nearby Cannizaro Park. Students submitted sculpture for selection and staff were invited to show work. After the thrashing Somaplumb had recieved at the last Crit I was very surprised to be asked to make a return visit, on Cannizaro Crit Day, with college staff and Peter Fuller. This critic hated abstraction. Richard Serra was his nemesis. Work that was figure-based was OK. On this Day his particular favourite and deserving of special praise was Sea Rider. This was an important work for Glynn, who had looked again to his experience of the Etruscan Museum in Rome. It was an interesting day. I supposed that I was teaching at Wimbledon because I held a different position, I subscribed to a less dogmatic credo than the others. I admired the energy generated by the school as a whole, many of the students exuded confidence as to their direction about what they were doing. Nonetheless I was never convinced by this kind of exclusive doctrine, which did not allow for individualism, nor experimentation nor mistakes nor enjoyment. It was too serious an ethos for students and one that, for all the intensive teaching, enabled few sculpture students to pursue a professional career. Is that the yardstick by which a school should be judged ?

My core teaching at Corsham stayed at two days each week for many years and it seemed to me that visiting other schools such as Wimbledon, Brighton and Winchester, (as a lecturer and later as an External Assesor) gave Corsham added value to my involvement. For the most part I was the only itinerant teacher working on the Fine Art Course. 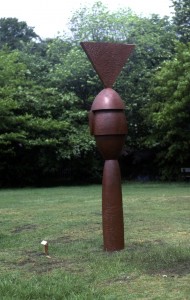 Fit for a King 1984 Coloured walnut

The Cannizaro Park exhibitions were significant for me. I made a succession of carvings for an annual event that I worked towards with gusto. I had some successes like Fit for a King and Walnuts, the latter thought to be, by my colleagues at Wimbledon, “a felt sculpture”, a more expressive piece than Somaplumb perhaps! On one occasion I made a failure, a very poor stone carving; two embracing figures, closest of all my sculpture to the Wimbledon canon, but furthest away from mine.