In our little garden the best place to sit, to catch the afternoon sun, is on the seat that faces south. The view from there is of the Clocktower and down Bath Road, the A365, which is the main thoroughfare through the village, towards the distant hills of Roundway Down, out to Devizes. Roundway Down was the site of the battle that gave the Royalists victory over the Roundheads in 1643. We picnicked there with Penelope Ellis when my children were very small. There are days when these hills are seen as crystal clear, or green or yellow in the sunshine, and on occasion obscured by cloud. 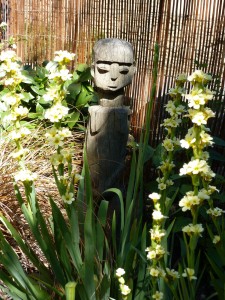 I have decided to make time to sit on the garden seat and enjoy our little garden. This is a change of mind-set for me. Formerly I have thought of the garden as work to do, as a task and responsibility: water the pots, trim the hedges, cut the grass and kill the weeds. Now I regard it as a place to take pleasure. During the few sunny days of our English summer, I sit warmed and see the big SUV’s go along Bradford Road to Stonar School to pick up a child and watch other mothers, navigating a pushchair along the narrow pavement, to collect their other children from Churchfields Primary School.

It is a small garden with trees, shrubs, flowers and, among the grass, lots of clover and daisies, a few buttercups and some moss, (but no dandelions, they are not welcome). Front and back are much improved since Steph came to help, but the garden is caught in a web of overhead cables, both telephone and electrical, stretched from a forest of poles, against the sky.

The two sculptures that were sited in the garden were for a long time popular, they are both figurative carvings. I made these pieces to show other sculptors, who were carving stone at the time, that I could do it too. These were the preferred works of my extended family and have survived in place, for more than twenty years. They were the ambassadors of my practice, until I acted recently to put an end to this misrepresentation. The smallest, an alabaster, I gave to a friend. The largest, Stone Eve, (a sculpture that Peter Fuller admired), I gave to Helen, who with her partner Mike, was looking for a centerpiece for their garden.

These ancients have been replaced by more recent work – a sculpture of three ceramic blocks with holes (originally there were five blocks, but losing two, the sculpture now looks better), there is a rectangular wood construction, and a ceramic work of six storeys plus a new bronze. This last is a temporary addition in the garden, there to take on a natural patina.

These are objects more compatible with the black box-like Ciment Fondu sculpture, made in the late sixties, that since we came to Atworth has hidden itself in the shrubbery. 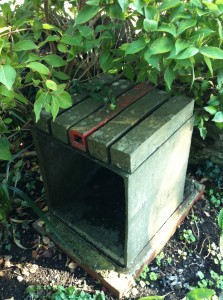 At one time this small space was the site of my studio, a great wooden shed. After we moved to Atworth we had a lot to contend with. The children of two marriages, a house that needed care and attention and a neglected garden. As well, I had to earn money and when I could, make my own work. Also I had to uphold my new status as a runaway lover!

This was in the mid-seventies, the time when Marlene and I were watched closely by false friends. They were expecting our relationship to founder and to fail, which it almost did.
Depression was the problem, striking unexpectedly. The waiting to be together was past plus the initial disruption to our children was behind us. We had set up house together for all the world to see and with a bit of luck we had presented our extended family with new possibilities. We thought the worst was over.

I had given up my splendid new studio in Pound Pill for the woman I loved, an act that shocked the woman who was divorcing me. She did not believe that I would quit my new work place, but I did. This left a void, a great big space in my life. It was a problem for me, because I had nowhere to work at Atworth. We moved my bench into the room between the kitchen and the living room. It had been the place to eat because the lean-to kitchen was only just big enough to cook in. Working in this middle room was not a wholly satisfactory arrangement, but it was a beginning. I made small wooden constructions that were cut and carved. Crucially this work space was an acknowledgement of the importance of my activity.

However not long after this, Marlene spotted a garden shed for sale. An unusually large garden shed, that had been custom made for a client who had suddenly died. Built of proportions that were not to everyone’s liking, very high and very wide, it was on offer at an irresisible bargain price: wood floor, a plywood, felt-covered roof, four walls including door and three windows and all for £800.
One sunny January day in 1979, Mr Boatswain, who had made the shed, my friend Geoff Hawkins who was a joiner, and I, set to work. Placing the floor on breeze blocks we then aligned the walls, bolted them together and, with a bit of a struggle, fixed on the roof and Bingo! the shed was erected.
The shed went up and so did a hue and cry. All of my neighbours objected to it, except for Mrs. Martin at 111, she gave us a jar of pickled beetroot as a gesture of support, together we were Artists Against Bureaucracy.

The Big Shed filled a very large chunk of our garden and was alarming in its bright pine colour, almost white. Standing out against the winter foliage and stone walls, it was yet to be stained with brown wood preserver. 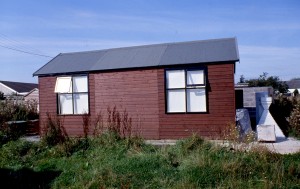 The matter was reported to two Councils; Parish, and County. Very quickly, Mr. Anderson came to look at the new build. He shook his head sadly and asked me to remove it. My too late application for planning permission was rejected and, eventually my appeal as well. This was a very unpleasant period. Although during the hiatus I occupied and used the studio,  I was never comfortable working in a place or being a person that was so unpopular in the village.

My giant shed made the local papers and narrowly missed Regional TV. Although it was filmed one afternoon and scheduled to be broadcast, it was James Callaghan who scooped the headlines on that day. Phew!

I had every reason, to be depressed and Marlene had many reasons to wonder about the man she had hooked up with.

These became Dr Dissa days. I began to make regular visits to Green Lane Hospital in Devizes, the former Lunatic Asylum and Mental Health Hospital. The good doctor did not have a tranquilliser mild enough to suit my sensibilities. Ativan, for example, had very unpleasant side effects. Some weeks I remembered Tuesday and Thursday but not Wednesdays!

David Webb came to the rescue, a supporter of Arts and Crafts and Chairman of the Parish Council. He wanted to attract Artisans to Atworth. His generosity saved the day and indeed, the Webbs – father and son – have been saving the day ever since. They have provided me with premises to work in – to date, for thirty-five years! David allotted me a small piece of his land for an extremely low rent, so that The Big Brown Shed could be moved to a less controversial site. I did have the presence of mind to have the building enlarged by inserting a new piece, one third, into the middle. This larger building looked more like a studio. It stood on a concrete base, provided by neighbour William Bird. But it was still unpopular with the people who lived close to. 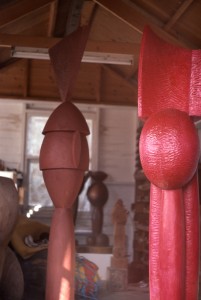 Mr Anderson finally sorted me out with the County Council. I had the proper permissions and my studio status was changed from workshop – a high rated building – to store (premises that were low rated). For several years I worked at the Rear of Bath Road very happily, until the field on which my Big Brown Shed stood became a housing development. I was moved to a stone stable, also on the Webbs’ land, at Chapel Plaister. The Big Brown Shed sold for £500, then we went on holiday to Morocco.

I made some good work in that studio: the Wimbledon sculptures, the Salisbury sculptures and the carvings for the Yorkshire Sculpture Park.