My core teaching at Corsham stayed at two days a week for many years, and it seemed to me that visiting other schools, Wimbledon, Norwich, Brighton (for a short while) and Winchester (for a long while), as a lecturer and then later as an External Assessor – gave Corsham/Bath added value. For the most part I was one of the few itinerant teachers working at that time on the Fine Art Course at Bath. 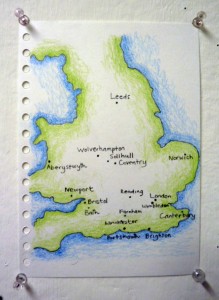 Roy Ascott invited me to teach at Wolverhampton. This was, I think, my first ‘other place’. The Painting studios were high in a tower block that overlooked Molineux football ground, while the sculpture workshops were at ground level under the guidance of John ‘Paddy’ Paddison, a stone carver in the tradition of Epstein and Gill, and teacher to Glynn Williams. As was usual on these occasions, when the teaching day was over my hosts and I would migrate to a pub where I would drink too much, and then suffer too much. This also happened to me in Leeds. I remember exactly the same scenario twice during a three day visit in 1989. I was working with Patrick Hughes, Geoff Teasdale and Anthony Earnshaw (who kindly gave me a print from his Secret Alphabet series).

At Norwich School of Art, Derek Morris asked me to be an External, taking part in the assessment procedure, leading the regular staff of Martyn Welch and Katherine Gili in the first and second year Sculpture Crits.

This was a period that was coincidental with my teaching at Wimbledon and my regular days at Bath. This form of discussion and review of a student’s progress was common practise at many Art Schools, although Crit was an unfortunate designation for the procedure. These were difficult occasions for students, at the end of each term when three or four people, usually middle-aged men, discussed the work of the solitary student for at least twenty minutes. Always a nerve-wracking event and often destructive, sometimes undermining the fragile confidence of the beginner. Importing someone from outside the Course, a stranger to the College, whose job it was to lead the discussion, was even more intimidating for the student. This visitor absolved the regular staff of responsibility. They proceeded to tidy up after the Bad Cop had gone home, taking the culpability with him.

I spent some years doing similar ‘teaching’ at Corsham, particularly at Beechfield, in a tiny room with KH, PG and DK, ensconced with one student – a terrifying prospect for twenty-year olds. It was at Wimbledon that I found the Crits most difficult, those students who prescribed to the pervading dogma survived the inquisition while, it seemed to me, those who were more independent thinkers were harshly treated. I learnt too slowly, I’m sorry to say, but I made sure that the regime that was my responsibility at Sion Hill was more benign; two staff, a man and a woman, talking about art and life with one student and very often with ten students as part of a group discussion.

I was lucky enough to be at Norwich when Ed Middleditch was Head of Fine Art, when it was still an old fashioned Art School. One of a number of places where painters – like Ed at Norwich or Martin Froy at Bath or Bill Crozier at Winchester – could secure their retirement pension by heading a Painting Department for a decade, while spending part of their working day painting the canvas that stood on the easel in their office. This was a period when artists, with considerable experience as artists, were in charge of Fine Art. The change to University status, as Art became subsumed within a larger institution, upset this equilibrium and Fine Art became gradually downgraded to “hobby status” on any list of a University’s most profitable courses.

My visits to Norwich were enjoyable; I did what I was paid to do. I was living at Marshfield then and money was in very short supply. Travelling by train to Norwich, I was collected from the station by Derek in his Peugeot Estate. I stayed overnight with Derek and his wife Christine, snug in their thatched cottage. The Morris’s were very kind to me, especially during a particularly stressful period in my new relationship with Marlene. Most of the phone calls home I made while I was at Norwich started well but ended badly. Silly fool!

Teaching in a city school, rather than one set in a village, was always exciting for me. In urban surroundings, I was exposed to a different dynamic. Walking out of the studios across the road to a café, (not a canteen), to have a coffee break amongst city people, was a refreshing change from the grass and trees of Beechfield at Corsham. It was clear to me that in the Art schools at Norwich, Leeds, Winchester or Wimbledon – that is, schools set in an urban and socially diverse environment – the student’s concerns and the work made in the studios had more relevance to their world, to twentieth century Britain.

One year I donated a sculpture to a fundraiser for Norwich Contemporary Art Society. It was called Façade made of Pentelic marble, that sat on a little wall of wood, Even now, I do not know whether or not it was bought, or by whom, or if my sculpture is being enjoyed in a happy home. My memory of it is that it was an okay sculpture, or perhaps over time it has assumed qualities that it did not really have.

At Brighton, James Tower was Head of Fine Art, until he moved to a less complicated existence as Head of Sculpture. When Gerard Wilson was on sabbatical I took his place for a while, teaching at Brighton on Fridays with Stephen Cox and Ian Potts (of Sunderland College of Art), with whom I sometimes stayed overnight in Lewes. I worked with Second Year students who were very lively. During my lunch break in Brighton I bought fur coats (very second hand), for the two girls in my family. They were all the rage among teenagers then.

An External Examiner at Canterbury, Winchester, Coventry, Solihull and North East London Poly, I sometimes worked at two colleges during the same period, as well as being an Internal and dealing with an External at Bath, making for a busy few weeks towards the end of the Academic year.

I served on the Fine Art Research Committee at Wimbledon for a while. Two Externals, Anita Taylor and me, when Colin Painter was Principal. Kier Smith was in charge of Sculpture then and Vince Woropay was leader of MA Sculpture. They were good meetings. At Winchester too I did Internal, with Heinz Henghes and Bob Holding, when Robert Clatworthy and then Wendy Taylor served as Externals.

An External usually made two preliminary visits to the Year Three students’ workspaces during the autumn and spring terms (this was before Semesters). My policy as an External was to first look hard at the work presented – without reference to the marks of the Internal teaching staff, and make up my own score sheet. It was a great relief if I got it right, or even almost right. Any major differences in my marking and the permanent staff marking promised lengthy discussions, sometimes acrimonious and these were best avoided. Next I would discuss the marks and the work with the Head of Sculpture in order to come to an understanding. Consequently I was able to go into the meeting of the Fine Art Exam Board having identified those marks that we agreed and those where we did not. Only once was I seriously at odds, this was at Canterbury, where I was working with Roland Piché (we were at the RCA at the same time). A student from Kenya completing the Sculpture Course had made woven baskets. I could see no engagement with or understanding  of sculpture, either African or European. I found it very difficult to agree that this basic craftwork merited a BA in Fine Art Sculpture. No matter how many times I put forward my concerns, the Head of School persistently overruled me. The message that would be sent by her failure to other overseas students, who may be considering a course of study at Canterbury and paying full fees, was unacceptable. I was a lone voice amid a bombardment from all parts of the table. I finally gave into the unanimity of the Course staff. At this distance I still hold my reservations, but I’m happy that the student did not fail. It was the staff who had accepted her on to an unsuitable course who should have flunked. I was right though to make it difficult, to instigate a debate, and also to show that I was not just a rubber stamp.

One feature of an External’s life was the hospitality of the hosts; this varied from school to school. At North East London Poly I was taken to a pub for lunch, at Canterbury taken to Whitstable to dine on fishcakes, which was far too far, for far too little. At Winchester lunch was provided in the Board Room. When at Coventry, I ate alone in my hotel room, one window over-looking the Bus Station, from the other, a view of St Michael’s Cathedral. I loved being that close to Epstein’s Ecce Homo and St Michael’s Victory Over the Devil. 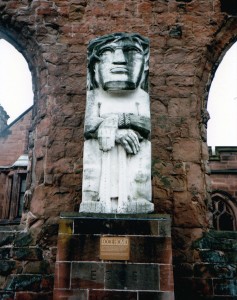 At Coventry I worked with Chris Dunseath. Although I know that Dave King taught there, I never saw him. Coventry included Solihull, don’t forget! How could I forget Solihull?

The External’s job was, as I have said, to agree the marks at the Final Meeting, to make a verbal commentary (if so minded) and submit a report on the way the examination process had been carried out, perhaps remark on the course generally and say ‘Thank you’ for the hospitality. The trick was to write the report as soon as possible, even on the train home and enclose an invoice.

The Fine Art staff at North East London Poly (led by Simon Lewis, a former BAA student), have the singular status of being the most generous of the Fine Art Courses I worked with. I am most grateful for their parting gift at the end of my four years tenure; this was a book entitled Picasso’s Etchings, a little treasure. Winchester School of Art, working with Prof John Gibbons and Cathy Cruen, was the least onerous venue of all, very close to home in many respects and I could travel back to Atworth at the end of each day. 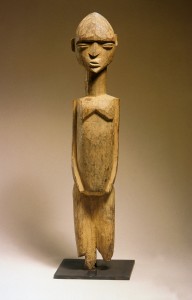 In 2001, the Sculpture and the Divine exhibition in Winchester Cathedral followed a Symposium at Winchester School of Art. During my presentation on the religious significance of sculpture to the Lobi people of West Africa, I projected an image of our great Lobi carving. In the audience, Rev Canon Dr Keith Walker, Curator Prof John Gibbons and also Zuleika Dobson of The Hampshire Sculpture Trust at Winchester, were so taken with this carving they asked to include it the exhibition and also to use the image for the poster. My Lobi carving had made a remarkable journey, from a tiny village of clay dwellings in the Upper West Region of Ghana to centre stage in one of the largest Church of England Gothic Cathedrals in Europe.