One morning in late October, when I was twenty-one, I was working outside the Sculpture School at the Royal College of Art, squeezed between the building and the railings on Queen’s Gate. This was a discreet spot, a place where I did not attract too much attention from the tutors. I was carving a piece of wood the same size as myself (a characteristic even now of my ‘larger’ works). This was a strange knock-kneed personage with hands clasped across the breasts and with an ovoid head, a sculpture that was informed by the currently fashionable Italian sculptors, like Marino Marini. It was a version of a work that I had first made at Sunderland and left behind, standing in the grounds of Backhouse Park. (For how long, I wonder, did it stay there?

Anyway, I was making this crude wood carving when Bob Jewell found me. He was on a student trip from Sunderland Art College to visit the London galleries and he had taken the time to seek me out – an emissary from my father! He came in an attempt to dissuade me from marrying in haste. At some point when I was at the Cedars, Bob had told me that if I wanted to be an artist I should marry a wealthy woman. ‘Marry for money not for love’, he had said. Unsurprisingly I suppose, I objected to this interference by my father, who was sending someone else to tell me what to do. He should have known me well enough to realise I would act exactly as I did, more determined than ever to do as I pleased.

The wood carving was never finished because it was bought (in rough and ready form) by a designer to decorate a new Polynesian restaurant somewhere in London.

I think it was initially down to George Cutts that I started at the Royal College in 1957, thereby escaping the dreaded National Service. When it was announced that compulsory enlistment for 18 year olds was going to end in 1960, George had calculated that having been accepted by the College, if we did the four year course before National Service instead of after it, as was the norm, we would not have to do our National Service at all. This was a major change and a significant re-routing of that period of our lives.

Although happy that I had avoided National Service I had, in fact, missed an opportunity to grow up. Joining the 1957 student cohort, we – George Cutts, Hughie Clarke and I – were seriously disadvantaged by working alongside students who were two years older, more experienced and more mature.

No wonder then that the three of us were among those asked to leave the course at the end of the year, having ‘failed’ to pass the first year examination! (Thereby hangs a tale that is told somewhere else among these pages).

Professor Skeaping played Bartok records very loudly on his gramophone, Music for Strings Percussion and Celesta resounded from the studio space at the end of the main corridor. This was the accommodation he used for working and living, with Rita Ling. The main studio at the College was dominated by two large wood carvings, perhaps Apostles? These were at least seven feet high, made from laminated Iroko planks. Skeaping was seldom seen working on these sculptures, but as they did progress, albeit slowly, we assumed he worked at night.

Near the entrance stood another Skeaping sculpture, a remarkable work carved from a huge granite block – figurative and standing with legs apart and arms held away from the body. Memorial (to his son Paul) is a demonstration of superb craftsmanship, amazingly, an airy sculpture using the most intractable of materials.

One afternoon Skeaping gave students from all years a demonstration. How to model a portrait head in clay, working from an old man sitting close by. A brave but foolhardy thing to attempt in such a short time, while being watched by disinterested pupils. We would have preferred a master-class from that virtuoso of the portrait, Sir Jacob Epstein, who lived only a stone’s throw away in Hyde Park Gate. The result of Skeaping’s endeavour was an embarrassment. The completed work was a likeness that closely resembled John Skeaping, not his model. His attempt to show us how it was done was not a success.

Tutorials from Meadows on the other hand were short and sharp. I was making a ‘fallen warrior’, commonplace subject matter at the time, that was prompted by universal anxiety about nuclear devastation and the Cuba Missile Crisis. We were a generation that thought the end of the world was nigh. Scrutinising this ‘figure’ isolated in the centre of a large plinth, Meadows suggested that moving it to the edge, to a non-safe place, would create more tension in the work. He ended his advice with intended humour, “Don’t you do it, it’s a good idea. I’ll do it!”

Meadows was a timekeeping tyrant, as I was leaving the building one lunchtime, passing the wall clock on the way out, he boomed down the corridor

‘Pennie what time is it’? In my innocence I told the truth – ‘Twenty minutes past twelve’ ‘Then you should be in the studio for another ten minutes, at least’ he thundered. Shame faced, I returned to work until the official lunchtime of twelve-thirty. How unnecessary was that? 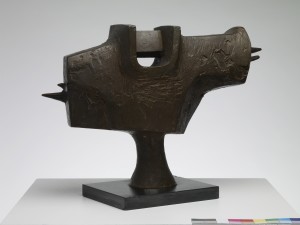 But I was one of the lucky ones, fortunate enough to have Professor Meadows’ support while I was at the College, and afterwards when I was teaching at Corsham.
During the year of Meadows’ first intake we had weekly seminars with the eminent critic David Sylvester, probably the high point of my eight years of studentship. In fact the seminars were arranged for Year One – Roland Piche, David Hall and David Horn – plus three students selected from Year Four: John Clinch, Ray Arnatt and myself. David Sylvester often came to talk to us directly from BBC Radio, after  taking  part in The Critics. He was usually fired up with the ideas that had been discussed on the programme, and wanting to test them out on the new generation. He had an incredible memory for what was said in those seminars, disconcertingly reminding us that we had held a very different view two weeks earlier. In his presence we learned to consider carefully what we meant by what we said. One afternoon I carried a Giacometti bronze, given to Sylvester by the sculptor,  from the Sculpture School in Queen’s Gate along Cromwell Road to the Lecture Room at the Science Museum (when Sylvester was writing his monograph on Giacometti). I can’t remember why we held our meeting there. Perhaps all the studio spaces had been taken over by Degree shows?

Bernard Meadows was exasperated by some of his students or staff on a daily basis. He would regularly go red in the face and smoulder (at women sculpture students in particular), most often at the students that he had inherited from his predecessor, John Skeaping. Meadows did not subscribe to the British idea of being fair. “It prevents so much from being done,” he used to say. When we, the final year students, met with Meadows to decide who would exhibit in which space; John Clinch and I were instructed to have our sculpture and drawings in Studio 1, which was where we worked every day. Ray Arnatt was directed to exhibit his bronze reliefs and drawings on the walls of the main corridor. The rest of our group were left by Meadows to sort themselves out! 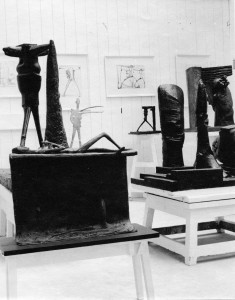 Before making his drawings, Ray had prepared a dozen frames, all the same moulding and all the same size. The wrong way round, I thought then, but his strategy paid off as Henry Moore, making a selective visit to the Degree Shows; (along the corridor and into Studio1), bought a drawing from Ray! All of this took place in Queen’s Gate in South Kensington, a wonderful locality to live in, and a wonderful place to work.

In his studio in the late fifties, Meadows – wearing the ubiquitous blue and white striped T-shirt – was making Post War sculpture – the ‘Shot’ birds and ‘Armed’ figures series (perhaps his best work), as plasters for bronze. His technical virtuosity in the Plaster Shop commanded considerable respect (although apparently it was Anne Severs who showed Meadows how to work directly with plaster during his time at Corsham).

Meadows expected us to work hard – to arrive before 9am and work until 3.30pm at the very minimum. The studios closed at 10pm and we were often working until then. Our Professor expected us to know current exhibitions, and therefore to go up West, to Cork Street almost weekly, hence the 3.30 gateway. We hurried to see the sculpture of the ‘Sunshine Boys’, the Italians: Greco, Manzu and Marini. Then they were the superstar sculptors bringing light and warmth, after the dark clouds of the Anxiety of Fear group. Meadows would put his head round our studio door.“Have you been to see the Manzu?”  “Then go now!”

At our Degree shows Meadows introduced Arnatt, Clinch and me to the dealer, Peter Gimpel, who said. “If you ever get a reputation, come and see me.”

With the arrival of Bernard Meadows at the RCA, the age of The Temperance Seven was over; nostalgia was out. Looking back to the Ancients, specifically Mexico, had gone and we were suddenly catapulted into the Anxious Present. Ralph Brown was joined by new visiting staff; George Fullard, Robert Clatworthy and Elizabeth Frink, and Jack Smith eventually replaced Christopher Ironside as drawing master. Elizabeth Frink, then at the height of her celebrity (at the Queen’s Elm in Chelsea), found my figure with seven arms “very interesting.”

When George Fullard heard I was going to Rome, he told me of his disappointment at not  reaching the Eternal City, during WW2. He was badly injured when his tank was blown up as the British Forces were fighting their way from southern Italy. Fullard employed John Clinch to cast a sculpture in Ciment Fondu, (probably one of the Falling Woman series), I helped a bit. George Fullard taught for one year at the College, he was immensely influential. John and I were privileged to be able to spend time in the evenings working with him; it was a coming of age. We were both regarded by Fullard as sculptors with something to offer, in spite of our limited experience. No longer students but journeymen about to be articled. 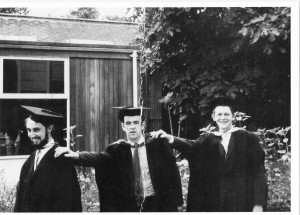 Ray Arnatt was awarded the RCA Silver Medal for Sculpture, the RCA Drawing Prize was won by John Clinch, and I had the Prix de Rome and half of the Sir James Knott Scholarship. In his first year as Professor of Sculpture, Bernard Meadows’ students, (well three of them), had won all the trophies. No surprise there!

John Clinch died from cancer in 2001 and Ray Arnatt died from a type of Motor Neurone disease in 2004 – both gone.

I am a touch remorseful that I am still here, still working, making my peculiar objects of limited appeal, and sad that for so long I disregarded the closeness and intensity of those years of working friendships.