After the experience of making Good Morning World in Slovenia and the resultant boost to my confidence and self-belief, I exhibited twelve sculptures and some drawings at Angela Flowers Gallery. It was to be the fourth and last one person show with that dealer, and my last exhibition to date at a commercial gallery (a business that relied on sales to pay the bills). 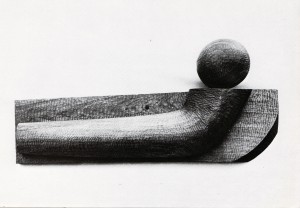 I was somewhat under the influence of the Wimbledon dogma, where I was teaching on six Fridays a term, and as a consequence concerned about subject matter and content. The sculptures for this show were more figurative because they had a good story to tell. Beware the sexual content of Pipedreams, Lovebirds, Two Heads (Are Better Than One) and Good Morning World. These works are a quartet of more lyrical and celebratory sculptures; they were made knowingly to counter ‘concept’ and ‘formalism’. Each one was crafted using the traditional materials and methods of sculpture: carved wood and carved stone.

Marlene’s father Bob Davis, a mason, set me right with the two stone carvings in the show. As a ‘thank you’ we took Bob, and Marlene’s mother Edna, to see the exhibition at Tottenham Mews, in the shadow of the Post Office Tower. Afterwards, we had lunch at Bertorelli’s in Googe Street, the place to go after an opening night. We had Pasta alla Genovese with butter and fresh basil, good to eat and also good value.

Next door to Angela Flowers was the Annely Juda Gallery. One art space following another to the same area, in an unsuccessful effort to create a Gallery Hotspot (like Bond Street or East London). In the early 1960s Charles Spencer selected two sculptures of mine to be shown in a mixed exhibition at Annely Juda‘s but, regrettably, that show never happened. 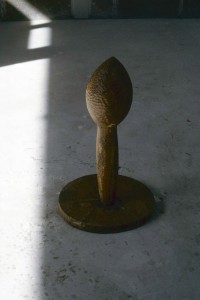 This exhibition, simply called Michael Pennie, at Angela Flowers Gallery, comprised mostly carvings – in stone and in wood, one good bronze and several drawings. This was a show that was a joyful celebration of love and sex and my new relationship with Bob’s daughter, Marlene. It was a show that was generally disliked. There was evident disappointment from Muriel Wilson and Theresa Gleadowe from the British Council. The exhibition attracted no critical attention whatsoever. Waldemar Januszczak, then art critic for the Guardian, reviewed the show next door but did not go into Flowers Gallery; there were no sales. The work was thought to be regressive in that it was less formal and there was strong subject matter; it was not as discreet as my other shows. It proved to be my last show at Flowers. 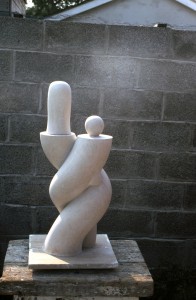 My work in the Lovebirds Show followed in the tradition – indeed defended the tradition of sculpture – yet was of no interest to either critics or collectors; it was almost ignored. Many of those who made it to the opening were, I know, disappointed that the work was not as expected. The exception was John Hoskin who came with Terry Frost. He greeted me with, “Maestro”

The carving Lovebirds might have been bought for the Arts Council Collection, a nearly but not quite purchase. I recall the frantic last minute phone call to Adrian Heath, then a member of the Purchase Panel and, I believe, keen to give me and the gallery a financial boost. On the last day of the show I asked him, “Shall I take it home or leave it in London?” “Take it home” he said.

Later on, after I had reworked it, I lent this sculpture to an exhibition in Henley and it disappeared for nearly twenty years. Finally retrieved, it was more or less lost to me again, sitting in a little courtyard at the Royal United Hospital in Bath for a long time. Only recently coming home to our Atworth garden. 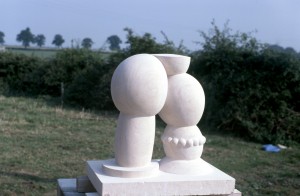 Two Heads (Are Better Than One) 1981 Ancaster stone

I did leave two bronzes behind when I cleared the Flowers Gallery; I expect they proved to be a reasonable recompense for the Gallery’s expenses of my show. I did not make any money from the exhibition (I never did). However some of the costs of the sculptures were recovered when Two Heads, and a drawing for Two Heads, were bought for the Arts Council Collection by the Purchasing Panel of Prunella Clough, Malcolm Hughes and Peter Bird. This happened later in 1981, and not from a commercial gallery but direct from my studio in Atworth.