My father was George Alexander, son of Margaret and George Alexander. His sister Ena was the eldest child and there was a second son called Granville. Ena only appeared once in my early years or in all of my life come to that, when I had pleurisy. My brother and I were living with my grandparents, Nana and Grandpa, in Holland Avenue – I was not very old when Ena (a Ward Sister) had been called in to dispense her medical expertise from somewhere in Northumberland. I remember during my convalescence I was taken, well wrapped up, for a walk squashed in a pram and I was peered at by Ena.

Like me, Granville married a girl of Catholic persuasion and was seldom mentioned by the rest of the family. He lived and worked in Portsmouth, it was a very rare occurrence to see him and Kitty, in Wallsend. Of the two brothers Granville most resembled his father. My father, George, had gone to evening classes and studied electricals at Rutherford College in Newcastle and had thereby transformed himself into a collar and tie worker, taking a step up the ladder from the blue collar of his brother, a ship’s caulker, and his father, a shipwright. Perhaps Kitty worked at something too, she had no children, being a Catholic without children must have made her life pretty miserable. Ena never married, she was always a Florence Nightingale figure to me. There was only my brother George and me; two grandchildren from three children, to gladden the old folks. But I doubt that we ever did that. Their regime was harsh and relentless, although regulation was certainly necessary as no doubt I was a handful.

My first wife gave birth to four children, only one of these was a planned birth, the third baby we called Rachel. The others happened as a result of our ignorance and confusion about the practice of birth control. I was too lazy to make use of contraception. My wife, being Catholic, preferred a rhythm method, with which I was out of step. Our sex life had never been very satisfactory, I was turned on by lust and not love, we seemed never to acquire an affectionate sexual relationship or to learn from our mistakes.

Christopher was born in 1960. A baby that brought joy to his mother and some pride to me, although my contribution up till then had been fairly minimal. My wife gave birth in St Mary Abbots, a hospital in Kensington, a lovely building. The baby was a little jaundiced, it was a few days before mother and child came home to Castletown Road.

I was in the third of my four years at the Royal College. The sudden obligatory maturity of fatherhood contributed to a step up or a change of gear in regard to my work at college, this increased exertion paid off with a good degree.

I recall these months as the happiest period of our married life; being a new mother was gratifying and gave my wife a role both understandable and one she was quite capable of fulfilling. Our priorities were clear, as a father I had to work hard to support my family, that meant four and a half days at college. Long days, early start and a late finish, and then two half days that included the Sunday of necessary paid work at Michael Clark’s studio in Sloane Square.

My wife spent part of her day walking with Christopher in his pram and then pushchair. Usually in the pretty park called Glendower Gardens, not far from home, where she met with new mothers who became new friends.

Alison was born in Sunderland at the Three Tuns pub, home and business of my father and Isabel and their children, Jackson and Annabel. I was still in London, emptying our flat and selling off what I could and still working for Michael Clark at his studio in Sloane Square. Engaged with one last mega job that, I thought, would bring me a handsome bonus, a send off to Rome.

I arrived in Sunderland just after the premature birth. The plan had been that I would spend some time in Rome, establish myself, learn the ropes for about 3 months then send for my wife and two little children. Dramatically and not without some rancour this plan was changed at the very last moment and we all left via Newcastle Airport to Heathrow en route to Rome’s Leonardo da Vinci airport.

Rachel was born in Neston, midway between Corsham and Atworth. Alison had died and within a year we had another baby girl. Rachel arrived at our home, myself in attendance throughout. The birth of a beautiful dark-eyed baby in good health was a relief that took us from a sad place to a happy one. Again, a boy and a girl.

In high spirits we moved from Neston to Corsham, to Pound Pill. A Corsham Estate house with spaces where I could work. Here we had a happy surpise, Daniel was born.

I had always held that as a child of parents who went through an acrimonious divorce, suffered a broken home and other disturbances during my growing up, I would protect my children from exactly these traumas. To me at that time ‘for better or for worse’ was a promise that I adhered to. With a confidence born of ignorance and naiveity, I believed I could cope with and enjoy our expanding family. Add in two cats, a dog and a goat!

My dormant unhappiness and the misgiving that something was wrong in my life were relegated to the darkest hours, when my frustrations kept me from sleep. 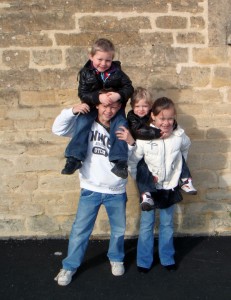 I have been asked by one of my children not to reveal any of his personal details in this memoir. I am happy to comply to this  request, in truth my relationship with my children has for some years been such that I know very little about their lives that could be considered personal. I am aware of my own lack of understanding of others in my family. Perhaps I should spend part of my ‘retirement’ studying the psychology of parenthood and give up reading Scandanavian crime novels. They are of little help to me in comprehending my children when they are grown! In spite of this I am gratified that, unlike his own father, Christopher, with Amanda for sure, seems to have fulfilled my own aspirations to parenthood as the Dad of Jack, Ellis, Sam, Georgia, Alfie and Archie. This can also be said of Rachel and John, parents of Louis. As well as Daniel and Amber and their two boys Frank and Miles. Grandchildren I see too little of, especially as my days shorten as I grow older and distances seem to increase.

Marlene’s children and grandchidren are, of course, my family too. Although integration has been gradual, the Strides, Helen with Mike Green, Phil and Lynda and their daughters Annie and Janey, enrich the lives of the Pennies in Atworth. 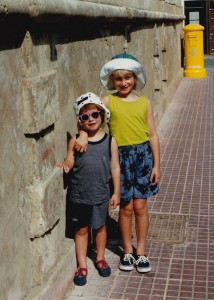 Quite late on in the setting out of this history it has occurred to me that although a number of mothers have played a major part in it, (I have had a Mother, a Stepmother and two Mothers–in-law) they have yet to be acknowledged here. In fact, so far they have not been mentioned. Their influence in the moulding of myself, and the direction my life has taken, has been considerable.

Isobel Duff was my birth mother, an Irish Protestant, brought up in Belfast, by her father and stepmother. Belfast is presumably where she met my father when he worked at Harland and Wolffe. I have no idea if my mother was ever employed, if she had had training or possessed skills. I did not know her with a job, except helping out at the family chip shop in Belfast, but then George and I did that too – to pay for our keep.

I remember my mother in pubs, when I was waiting for her, sitting on the pavement of Carville Road, the beery smell and tobacco smoke wafting through the open door, from the dark interior into the sunshine.

Mind you, when living in Station Road, I recall walking across fields to meet my father at the Masons Arms, a more rural public house, at the other end of town – going to meet the new Isabel. She was a volunteer at the British Legion, a charity worker who spent most of her life looking after others – mainly her father and her five sisters to start with, and then there was George, (the father) and George and me, Jackson and Annabel, and eventually their extended families too.
Isobel and Isabel. My father, when married to Isabel, became very cross when I spelled her name with an ‘o’ instead of ‘a’. There is obviously a Freudian slip here because I still hesitate when writing Christmas or birthday cards to my stepmother.

My first wife’s mother, Anne Marie, may have well been a kindly soul but she had shortcomings. She drank much more than was good for her and she borrowed money to do it. Marlene’s mother, Edna, was very different. Unsophisticated perhaps, but a very bright woman who had the experience and wisdom that came from a long life. I first met her as her daughter’s choice in 1976 and she surprised me (although she was not without reservations) by being helpful and supportive of her forty year old daughter who was ready to start again from scratch.
Marlene and I would visit her, at least every Monday at lunchtime for a sandwich. I was always welcome. There is the story of the suitcase full of money that helped us buy our Atworth house – have I mentioned that?