I have always thought of Wallsend-on-Tyne, the town that I grew up in, as my home town. My Primary School was The Buddle Boy’s School where I was a class monitor; I was a success here.  I went onto The Wallsend Grammar, where I was not a success. For some reason I thought I already knew everything. My earliest recollection of The Buddle was a playground parade, schoolchildren singing, “I vow to thee my country’. I was wearing my grandfather’s First World War medals.    Remember, Remember Empire Day, the 24th of May  I was born in Wallasey, Cheshire, in 1936. I have only indistinct memories of being there and only a vague idea of how long I lived in Lisgard Road. 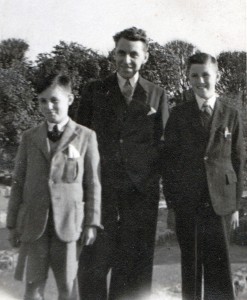 It was war-time, in the street outside our Wallasey home I saw German bombers silhouetted against a bright blue sky. With my brother and other boys, we walked the planks that criss-crossed the bomb craters in the nearby park, looking for bits of bombs to add to our collection of shrapnel. I remember too, that the bay windows of our terraced house exploded, there was glass everywhere, and then daylight was shut out of the house by replacement boards. At some point during the bombardment we were evacuated to a farm in Wales for an unhappy stay.This was prior to brother George, my mother and I boarding an enormous grey ship in Stranraer, and embarking on a journey to Belfast and my mother’s family, the family Duff.

Some time later on my return to the North east from Belfast, I sat the 11+ exam at The Buddle School without the least idea of why I was doing it. I only remember ticking boxes with a brand new pencil. Nevertheless, I passed. I was living with my father, George Alexander, who lived with his father, George Alexander, and his wife Margaret and my brother also George Alexander, at 363 Station Road. There had been a recent exchange of houses – rented of course – “from the quantity to the quality.” We moved from Hollins Avenue (and my friend Stan and the girl I kissed on a grassy bank one summer), to a larger house overlooking fields and a farm. When I told my grandmother, who was busy washing sheets at her ‘poss tub’, that I was going to the Grammar School, she literally boxed my ears; she believed I was telling stories. Later, when I was exonerated by a letter from the Education Department, she took me to the cinema.

It was either my abilities as a performer or my innate need to be centre stage that began to flourish in Wallsend, and in diifferent ways. At the National Association of Boys’ Clubs – then a series of wooden huts on Station Road – I took part in the Summer shows and Christmas plays. In the Church Hall, also in Station Road, I employed my diverse talents, taking part in dramatic productions, designing the sets and posters (for ‘designing’ read ‘painting’), and performing as a magician. I was introduced to conjuring by my brother’s friend Norman who lived nearby, next door to Doreen, my first crush. She was a couple of years older than me and flattered by my blushes.

As far as I remember, I was the only one of my family to go to church. Further up from where we lived in Station Road was St John’s The Evangelist C of E. I seemed to graduate from choir boy to altar boy. Attending more than once on Sundays as a choirboy, and on cold and dark early mornings as altar boy for week day services, when I rang a little brass bell several times. My top job, wearing cassock and surplice, was carrying the polished brass cross at the head of a procession around the church at Festival time. I was encouraged to consider the priesthood as a vocation. The vicar was the choir master as well as the scout master. We choristers, who were also scouts, would be taken to the seaside, to the swimming baths, on riverside picnics, anywhere in fact, where it was legitimate to take our clothes off. Autumn and winter we would be together on Sundays after Evensong, and midweek after choir practice to have tomato soup and play Monopoly at the vicarage. The Rev Whitehorn, it turned out, was a paedophile. The older boys in the group, eleven or twelve years old were singled out for sexual abuse.

One evening, late by school boy hours, two detectives arrived at 363, in plainclothes; that is, each man wearing a raincoat and a trilby. Conversations took place in the front room. I could hear my father making angry responses to their questions. Without explanation I was escorted to a police car and driven off to a doctor’s surgery for a rectal examination. The investigation was quick and momentarily brutal as rubber gloved fingers were thrust up my anus. Trousers back on, I was taken home. The detectives reassured my father that I had not been penetrated. I had been fiddled with and even slept with, but no act of sodomy had occurred. At Whitethorn’s trial I preferred to stay silent in court, unwilling to divulge from the witness box to all and sundry, any details of my encounters with the vicar, (other boys were more seriously abused). In my case, the real trauma of those events was the anger of my father. Also the casual indifference of the police, the police doctor and the subsequent court proceedings. Edward Whitehorn, born in 1907, was vicar of St John’s The Evangelist. until 1947, but, so it is said, ‘after some difficulties’ left parochial ministry to be employed by the Society for Promoting Christian Knowledge, until his retirement in 1971. He enjoyed a full working life then, interrupted only by the twelve months he spent in prison. Perhaps the excursions I had had with the Rev. should have been undertaken by my father, but at this point he had no time for us. He had provided a place ( I hesitate to call it a home) for George and I, and food, but little else.

There seemed to be a deal of interfering with me as I grew up, yet only one photograph exists from that time to show whether I was a particularly attractive choir boy or schoolboy. I was approached in the park one day, a man unbuttoned his trousers and showed me his erect penis. It seemed to me enormous. I ignored his invitation to hold it and I fled! Next was a house-painter he was working on the exterior woodwork of 363. He persuaded my grandmother to allow him take George and me to the Town Moor, the giant funfair in Newcastle. He wanted to show us the blonde snake charmer – ‘I wish she would charm my snake,’ he said. I was mystified by this remark, which must have been the catchphrase of that day. At school in Sunderland my geography teacher would call his pupils forward to stand by his desk. When it was my turn to have my homework examined, he would slide his hand up my short trouser leg and fiddle with my private parts. All the boys in the class knew this would happen, as it did to most of us. We were an audience of silent sniggerers. I failed GCE Geography. 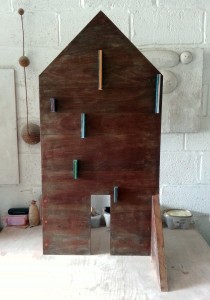 Most of Carville Road was occupied by Wallsend Co-operative Stores. This was where, in happier days, my dark green bicycle with chain guard, bought for my journey to and from the Grammar School, was purchased, paid for by Isabel, my soon to be stepmother, from her Co-op dividend. The few terraced houses in Carville Road were unusual – two storeys, ground floor and first floor – two separate dwellings. The upper one reached by exterior wooden stairs leading straight into a kitchen/living room with bedrooms beyond.  We occupied one of these rooms, my mother, brother and I sleeping in the same bed. Another family lived there too, but my only recollection of them is sitting down all together for Saturday tea – for a boiled egg.

These houses were low rent homes for low-income families; I‘ve heard that all the buildings of that period have fallen down and been replaced by more desirable but more expensive houses. That George and I were reduced to living in poverty proved to be the last straw for my father, and especially for my grandmother who, after some negotiation with my mother, moved us out. Actually, we walked the two miles from Carville Road at the bottom end of Wallsend up to Station Road, at the top end, carrying our few possessions. We relocated to 363, a house with a bathroom, an indoor lavatory, clean sheets and home cooking.

Ironically my former school became The Buddle Arts Centre, one that consistently ignored my correspondence over several years. It closed in 2008 and is now a derelict building.