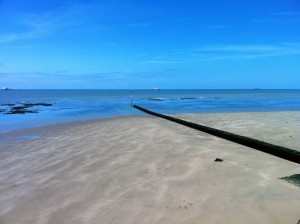 I was for a time homeward bound, most often on a Friday, just after 4pm on the train from Brighton to Victoria, having a beer with Elaine Johnson. Or I was on the long haul from Norwich, having tea with Katherine Gili, a journey that included a mad dash across London, from Euston to Paddington, usually to connect with a packed train for Chippenham. Going home from London after working days away, in my long gone drinking days I dreamed of a gin and tonic in the buffet car. But I never even got a seat – not until after Didcot anyway.

Today I am on a train to the South Coast, listening to Rusalka on my iPod, sung by the amazing Valentina Nafornita and of course thinking of Rachel Evans-Milne. Some time before this I had sent Rachel this aria, and wanting to hear more she went to Glyndebourne to see the whole opera, I think  it was her final excursion.

Our last minutes together in her home in Brighton were my first encounter with imminent death – I sensed death was close when I held Rachel’s cold hand and at the moment of her cold kiss goodbye. I was not good at coping with a loved one who I would never see again and it was Rachel who was able to make me easier. Her dying was very cruel, after the torture of Motor Neurone disease, to take from us such a beautiful young woman who shared her goodness with everyone. During the hell of her illness, Rachel – mother, wife and friend – was an inspiration to all who knew her.

I liked to have the same number of girls and boys as Sculpture Teachers at Sion Hill, after all there was usually parity between male and female students. If I remember rightly it was Alex Landrum who suggested Rachel Evans as a Visiting Lecturer, sometime in the early nineties, and as it turned out it was a very good proposal. A graduate from the Royal College was very welcome at Bath and there was a place vacated by Denise de Cordova who had gone on to another college.

Rachel began as an occasional visitor and soon became a regular, teaching two days a week for several years until she became a full time Lecturer in charge of sculpture on the Creative Arts Course. All the while based in London and driving down to Bath.

She met Al in 1998. Their first ‘public’ appearance as a couple was at the Africa Centre in Covent Garden. I had hired this venue in King Street for the launch of my book Adventures with Lobi an abc. There were many mutual friends and colleagues present when Rachel entered the room, beautiful in silver sparkles, slim, blonde and graceful, walking in with Al. I would not have been surprised if the whole assembly had burst into applause – Rachel had found her man!

After the wedding, and the party at a studio in Fashion Street off Brick Lane, man and wife lived together for some time in Al’s flat in Shepherds Bush. Their home was not far from Picture, Al’s framing business. Then, as the Evans-Milnes, they moved to a house in Hanwell for a while with baby boy Hamish, and subsequently to Brighton, Rachel’s hometown. She was able to take advantage of support from her family when she had her second child, a baby girl called Robin.

Rachel, all the while, was commuting from the south coast to Bath College of Higher Education at Sion Hill, piling up the mileage on her various second hand cars, and very often staying with us overnight in Atworth.

Every payday Rachel and I went downtown to lunch somewhere in Bath: soup and salad, or a sandwich. Our rule was never to go to the same café twice. Each month we had to find a place new to us – the unknown! We took it in turns to pay the bill. In between these times we had our packed lunches at college – outside on the grass when it was fine and in one or another’s office, if it was not. 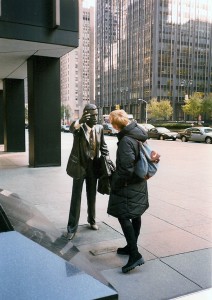 The friendship that developed was, I think, akin to a brother and sister relationship. We shared the same birth sign; in fact our birthdays were very close together. And as far as our jobs, the art world, and Art, our friends and family, and our love life were concerned, we had many fascinations in common. We were serious friends, with no secrets, forever having frank and earnest conversations. At College I was Rachel’s Mentor, however it was Rachel who was the generous one. I was the beneficiary from her insights, especially about myself.

The college trip to New York, in 1998, with Rachel as Staffer, Marlene as Welfare and myself as Leader, was a good one. With our students we made visits to Janine Antoni’s studio and to Jene Highstein. It was Rachel’s idea to take a long bus ride from Madison Avenue, through Harlem to northern Manhattan and the Cloisters Museum and the collection of art and architecture from Medieval Europe, a somewhat different location for me.

Rachel was always eager to learn and keen to acquire new skills in order to expand her students’ learning experience. When she took on responsibility for sculpture within the Creative Arts course, I gave her casting lessons one winter in my cold damp studio after she had finished work at College. Starting as my colleague, unusually among the many men and women I have worked with over forty years, Rachel became my friend. How do I define friend? Rachel was someone with whom I would share my feelings, my thoughts, my ambitions and my hopes and fears. We would eat together and enjoy the hospitality of each other’s homes, and the friendship of each other’s families. And we would share adventures and we would care for one another. Rachel always said we were ‘mates’. She had a brave heart and when others were silent Rachel would speak out, on behalf of a student – on the side of what was right. I knew that Rachel was becoming less interested in ‘things’ and that she had begun to pay more attention to people. 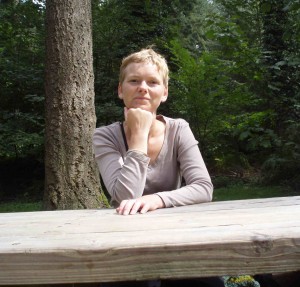 A special friend to me and to Marlene, Rachel will forever be in our hearts and minds – she illuminated our lives for always.

All of this on the The Javelin train between St Pancras and the south-coast (the Japanese-built Class 395) that can reach speeds of up to 140mph! I am going to Westgate in Kent (June 2011), a place next to Margate, to see my son’s new home and to make my first visit to Turner Contemporary.