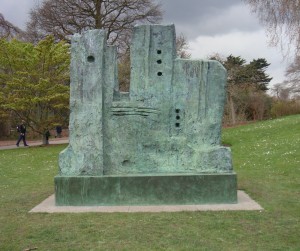 The Henry Moore Foundation has funded numerous Fellowships for sculptors throughout Britain, particularly as Residencies at Art Schools. In my day, they funded each Fellow for two academic years. This generous scheme provided invaluable support for graduates – a bridge between their studentship and a professional career. These ‘Fellows’ had the added value of enhancing the student experience by having a somewhat more practised sculptor working alongside them.

I had the bright idea to go one better. I persuaded the Foundation to enable Bath to have International Fellowships – artists from outside the UK who would receive one year’s grant to cover their expenses for a six-month stay. My aim was to attract to the Fine Art course at Sion Hill, sculptors of reputation and high regard who would impart to our students their broader experience of the world of sculpture. In the event we had more than thirty applications from far and wide, from Australia, Scandinavia and several from America.

Tessa Jackson, then Director at the Arnolfini, joined Colin Crumplin, Head of Fine Art and myself, Senior Lecturer Responsible for Sculpture, as the selection panel to choose an International Fellow in Sculpture for Bath.

Tessa was keen to have Perejaume, a Catalonian artist from Barcelona, while Colin preferred Ann Messner, an applicant from New York. Remembering my own appointment as a Fellow at the University of Wales (when B.S.Johnson and I were both selected from the same short list), I suggested that we appointed First and Second Fellows – Perejaume first and Anne Messner to follow. This was subject to the Henry Moore Foundation’s agreement, of course.

This accord came about through a visit to Sion Hill by Bernard Meadows and his wife, to look us over. After some conversation, and a discussion as to the details of the Fellows’ studio accommodation, materials allowance and teaching commitments (there were none), we went up the road to the Hare and Hounds for a sandwich – to my embarrassment an indifferent lunch.

At Bath, Perejaume occupied the studio space next to my office. He was delighted that this overlooked the city and that Beckford’s Tower was not too far away. I did not know then that Perejaume had only just completed his own tower rising from his studio in Sant Pol del Mar, affording him magnificent 360 degree views of the Catalonian countryside, attesting to his love of the natural world. The six months of the Fellowship enabled Perejaume to make the work for a major exhibition Perejaume: landscapes and long distances, at the Arnolfini Gallery in 1993, that went on to the Anderson O’Day Gallery in London.

Perejaume did not drive. One day I took him to a quarry at Doulting. He selected a large stone from the base of the quarry face, to be transported into the Bristol Gallery. He left behind a shiny bronze plate that was inscribed, “This stone has been temporarily removed to the Arnolfini.” During the exhibition, close by the great lump of Doulting stone in the middle of the gallery, was a photograph of the empty space where the stone had been and showing the bronze plate to let the the quarrymen where it had gone. Midway during his Fellowship, Perejaume returned to Spain to arrange the inaugural exhibition, (of his recent work) in the Centre Miro, a new gallery in Mont Roig del Camp. This small town is closely associated with Joan Miro who first lived there in 1911. Perejaume’s exhibition in Mont-Roig was a contribution to the Centenary celebrations of Miro’s birth. Six Fine Art students and I flew to Spain, to work with Perejaume during the week prior to the exhibition opening. We lodged in the chapel of Sant Ramon, a former monastery, perched high above the town on an outcrop of red rock. For an account of our adventures working with Perejaume in Catalonia, please see Perejaume’s book of essays Below the Pyrenees – El Pirineu de Baix. Mont-roig–Miro-Mallorca. 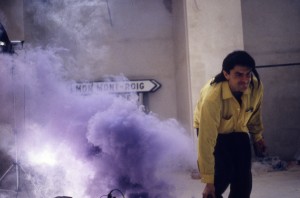 I had met Ann Messner in New York and visited her in her Brooklyn studio, before she arrived in Bath to take up her Fellowship. Her studio at BCHE was also next door to my office at Sion Hill. During her stay Messner produced several bronzes, working towards an exhibition called heart and ear at Walcot Chapel in Bath, an addition to Bath International Festival in 1995. These were dark assemblages of figurative parts and cast everyday objects combined with electric cable, particularly her sculpture Sapling, a complex configuration of cast bronze tree roots. She had produced sculptures that were Gothic in feeling and of a number and size that stretched the capability of our modest foundry to the limit. Instigating competition for the Department’s resources between Messner and the final year students. 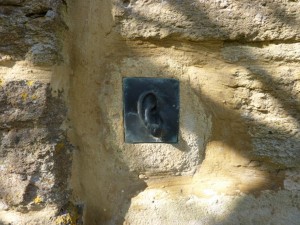 Most biographies record John Hoskin as being self-taught and an ‘assistant’ to Lynn Chadwick. He was a friend of Chadwick, certainly, but an assistant? I don’t think so, perhaps a helper? John introduced me to Chadwick when he was considering a large sculpture to be made in Polyester Resin. John thought I might advise, but the work was never made. Few writers document his Hoskin’s Army service and that he took part in the D-Day landings, an experience he would never talk about.

At Bath Academy John was not my mentor, it was James Tower who filled that role. As a senior member of staff, John was undemanding, in fact he made life easy for me, encouraging my initiatives and enthusiasms. John asked me to collect Cantilever Square 1966 from a company in Bristol that had galvanised his welded steel fabrication. This big metal object, nearly three metres long and two and a half metres high, did not fit into my Atlas van by a mile. The upright part of the sculpture projected out of the open back door, pointing skywards; it was big and heavy. Nevertheless I undertook a nightmare journey to Battersea Park for the exhibition Sculpture in the Open Air where the Hoskin sculpture stood next to the Armitage. 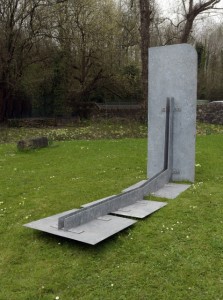 While staying with John for a weekend and drinking too much, John gave me Little Cantilever Square made of painted steel and brass plate. This is presently on loan to BSU at Corsham Court as part of the Corsham Painters and Sculptors – Revisited exhibition and sits next to a small bronze of mine, Six Zigs/Three Storeys, that is part of the University collection.

In Cricklade, John worked in a small stone-built studio. Each new work seemed to fill the space – like my spaces at Chapel Plaister. He did not mind that there were no windows. He said that it was disconcerting to look outside, to allow nature to intrude on the world of his imagination.

I was told that John and Clifford Ellis had a disagreement, I know that John was aggrieved that no event took place to mark his leaving Bath Academy in 1968 for a Residency at Lancaster University.

I had assumed that our friendship would carry on regardless but I saw little of John in the final decade of his life. The last time we met was in Winchester School of Art where he was Head of Painting and I was an External. Why he gave me a lift in his car I don’t recall, but I do remember it was a white Citroen Safari (a car that both Chadwick and Armitage drove in their hey day). John described it to me as “a boy’s toy”.

David Smith was for a long time my hero, not too surprising as his image was heroic. He was a giant with a definite macho charisma – a skilled blue-collar worker, with big boots and overalls, a cigar-smoking truck driver who helped me determine my own self-regard. Unfortunately I had little of his persona or attributes – except for an ex-USA army cap with a large peak and a bushy beard. I looked more Fidel Castro than David Smith.

The images in every Sunday Magazine of Bolton Landing and the sculpture he made in Spoleto, had made him an international figure at the height of his career. Although seeing sculpture half-covered in snow was to me something of a contradiction; like any hidden or wrapped object they become more curious. Moore knew this. See his great drawing, Mysterious Object.

To begin with I preferred Smith’s sixties work, the Cubi, which were formal and modern. However I reversed this pick years later when I saw the David Smith exhibition at the Serpentine Gallery in 1980.

Marlene and I went to this Smith show one morning and in the afternoon saw the Rodin Drawings exhibition at the Hayward Gallery. Making exactly the same two visits were a younger man and woman with a child. We had been around both exhibitions at the same time and had shared the experience of those wonderful works. Finally, coming out of the Hayward all together I asked the little girl which exhibition she had liked best – her mother spoke for her, “I hope it was the David Smith, because he was her grandfather.” she said. We had been with Rebecca and family one of Smith’s two daughters.

Three paintings by Peter Kinley are part of the exhibition Corsham Painters and Sculptors – Revisited at Corsham Court; they are the gift of Norman Paine, a former Principal of Bath College of Higher Education, the institution that preceded the present University.

Kinley came from Wimbledon School of Art to Bath Academy, following Adrian Heath as Principal Lecturer in Painting. At that time Kinley was friendly with Howard Hodgkin, (they travelled to India together). I have always considered Kinley the better painter. Kinley is after Matisse, employing the same rigour, accepting the demands and discipline of drawing and proportion and the critical relationship between each part of the canvas. Kinley was always a very careful and considerate colourist. He showed a respect for animals, which became evident in his painting (especially his work in Wiltshire) and also in the bronze Turtle as well as the small waxes he made when he was bedridden. They all serve as manifestations of a certain touch. I was very impressed that Kinley made sculpture. Kinley was intolerant of mediocrity, of reputations based on showmanship or personality – not founded on talent and hard work. 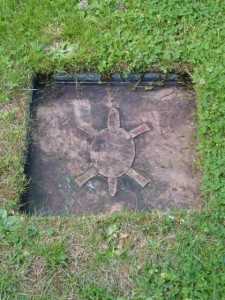 The intention of the exhibition Vessel at the Serpentine Gallery in 1987 according to curator, Tony Stokes was “to abolish the spurious distinction between the fine arts and the crafts.”   Critic Richard Cork wrote of Peter Kinley and Turtle “straying outside the confines of his easel. Turtle is ideal as a garden sculpture, the turtle lies hidden, lost beneath a layer of water.”

“But Michael,” Peter would say very seriously “you know that all the best sculptors are painters.” I would protest, as he knew I would, and bristle at such an outrageous suggestion. But think of Picasso, Matisse and Miro and David Smith (he began as a painter) and more recently Baselitz. It was an argument difficult to refute.

These ‘great’ artists have earned this accolade by making paintings, prints, ceramics, drawings, illustrations and sculpture, as well as commissioned works for ballet and opera. These masters were engaged in a creative diversity that was an indivisible whole, an artist’s life and work. A totality of achievement very often split into parts, a breaking up for our convenience or for that of the curators. 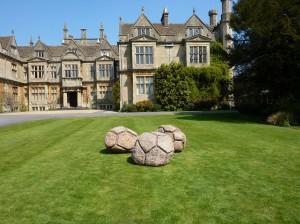