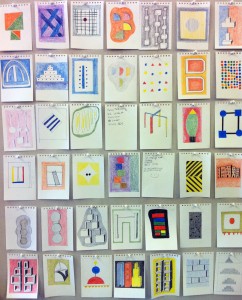 In the summer of 1972, desperate for money, I took a job at The Marble Mosaic Co in Bristol. This was a decorative marble business, making fireplaces, kitchen-tops, bathrooms and the occasional mosaic. During my years as a part-time lecturer, I had never really twigged that it was possible for me to ask for Unemployment Benefit. This was the dole as far as I was concerned and there was something a bit shaming about an able-bodied man, who was fit for work, applying for it. Christmas and Easter, out of term, I could just about cope with; I worked in my studio. But the long summer break ruined me, financially. I received no pay from Bath Academy, mid-August until mid-October and then only a small cheque.

It was not until the last week in November that I was solvent again only to be hit by the expenses of Christmas and another two weeks without work.

From Pound Pill I had to leave Corsham early to reach Avon Street in Bristol, by 7.30.am. At Marble Mosaic I was a ‘journeyman apprentice’ and I was awarded this intermediate status and the appropriate hourly rate because, as they said, I had some ‘useful experience’ in handling semi-precious objects and materials. I didn’t work on the Tungsten-tipped circular saw that cut the sheets of marble into the required pieces, but spent most of my day fixing parts together with the magic glue and polishing them with the magic paste.

During my lunch break and sometimes after work, or on a Saturday morning, I made a group of small constructions from a variety of marble off-cuts, including pieces of onyx. After my internship at Marble Mosaic, these little sculptures were shown at Bristol Museum and Art Gallery, with large photographs of the artist at work.

Knowing that I was to exhibit this work, Marble Mosaic generously allowed me time and materials and the use of their workshop to make the pieces. Only one of these sculptures is still with me, most were given away. It is constructed in Sicilian marble, most commonly used by fishmongers and the stone I like least. Nevertheless, it still sits in our garden, impervious to the wind and rain.
At Marble Mosaic, I was known to my workmates as a sculptor, so I was given the job of repairing a marble carving, probably Victorian. It represented a farm girl, she had lost the hand that should have been scattering corn to her chicks. A small block of white statuary marble was brought, strangely enough, under a lorry driver’s seat, from a quarry in Italy (to avoid duty, I suppose).

Try as I might to make the carving easy, whichever way I positioned the throwing hand, I could not avoid having gaps between the fragile fingers and thumb. Below the hard crust (the surface that had been exposed to the air), I found that the marble cut consistently and that the softer inside of the little block was a pleasure to work with. With a sharp chisel and a riffler I managed the fingers and the thumb and after a couple of days the maid was complete, restored. 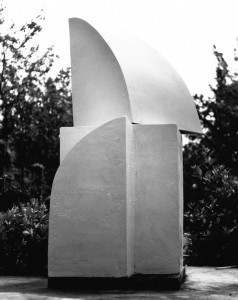 The two small pieces of marble leftover were my reward for this work. The dimensions and shape of these remnants determined the size and configuration of a small sculpture that I called A little Peace and Quiet, a two-tiered arrangement of three quarter circles. I was at the point in my domestic life when I really needed some peace and quiet. The demands of my wife and children, earning extra money and my work as a sculptor, were leaving me little or no space in my head. This sculpture was exhibited at my 1973 Angela Flowers exhibition, it was the smallest piece and was bought by Bob Heller, Angela’s partner. I think he also appreciated the title.

The little marble was good, technically refreshing to make. Working this wonderful material had put me in touch, for a while, with the great masters of my profession. I was encouraged to make a second version of A little Peace and Quiet, much larger and made directly with cast pieces, not plaster but Crystacal, a hard pinkish material that is strong and with a tougher surface than ordinary plaster. This was my attempt to by-pass working in clay and casting, working towards a semi-permanent result. In the event Crystacal proved to be only slightly more permanent than plaster. 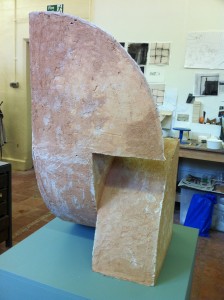 This two-part work was about five feet high; again an arrangement of quarter circles and slow curves. This sculpture was also in the 1973 show it was the largest work. Afterwards it went to sit in Angela Flowers’ garden, staying there for some time, perhaps two years. Kenneth Martin, one of the fathers of British Constructivism, saw it there and approved of it: his comments were passed on to me. I was encouraged, then and now, that a distinguished artist and one that I admired had been complementary about my sculpture.

Sadly, through winters of frost and ice, the Crystacal did not weather gracefully and I went to North London to break it up. This was a lazy way out of the dilemma, how to deal with an ailing work. I should have made the effort to take it home and made repairs.

I was reminded of all of this when I met Kenneth Martin’s son Paul at an HMI seminar Construction and its Shadow in Leeds quite recently. I was prompted to resurrect A little Peace and Quiet, at first a small version in wax for bronze then a larger ceramic piece, More Peace and Quiet 2011. The original was too good a sculpture to disappear without trace.

One summer Bob Heller took a holiday home near Devizes, presumably for some peace and quiet and to rest his damaged knee, a respite, from his job as Editor of  Management Today. To my surprise, although he was injured, we arranged a game of squash at the Christie Miller sports centre in Melksham, midway between where he was staying and my house in Corsham.

For some time I had been playing squash every week with Peter Green and I enjoyed our games. I assumed that Bob needed some gentle exercise and thought to go easy on him. As it turned out, although he moved very little, standing almost still, he dominated the centre of the Court. He won every game, exasperatingly the ball was always where I was not. As a sportsman I had never developed the killer instinct, but Bob Heller was a winner, no doubt about that.

I had been badly beaten previously by Martin Welch, on his home court at Diss, when I was visiting Norwich School of Art, (but that was on unfamiliar territory). To suffer the humiliation of a resounding defeat by an opponent with only one good knee, on my home ground was too much. My enthusiasm for squash has never been the same.

But Bob did give me some good advice, compensation for the dismal score-line – you only have one life – make the most of it!