I lived with my father in different places, Wallasey and Wallsend, and then we moved to Sunderland. Wherever he was, George would take delivery of the Book of the Month from World Books. He would wrap these carefully in brown paper and print neatly against a ruler with his Parker pen, the title and author on the front of the book and on the spine.

In the early 1950s when our new home, the prefab on Springwell Estate, was decorated (by me) and furnished, a stylish bookcase arrived. Glass-fronted with sliding glass panels, manufactured by G-plan, this veneered wonder became the centrepiece of the living room. That is, until a little while later, when the cocktail cabinet arrived. A glitzy sideboard that opened to a mirrored interior and became the repository of a variety of tumblers and wine glasses, but I never witnessed anything that remotely resembled a cocktail being shaken or stirred in 10 Saltburn Road.

Together, my father and I unwrapped his collection of books, the brown paper and dust jackets were discarded and the hardbacks were placed in all their glory, their multi-coloured spines and gold lettering gleaming, row upon row standing to attention in the new bookcase. Quite a display!

While they were still in brown paper I had read many of the books, particularly the novels, and occasionally travel and biography. My preferred authors were Grahame Greene, Somerset Maugham and my then favourite, Jerome Weidman; he wrote I Can Get It For You Wholesale. At one point in this book the hero was ‘as cold as a witch’s tit’ – I loved that line and as a schoolboy used it often!

Not unexpectedly then, books have played a large part in my life. Using up of a fair slice of my income, I have bought books to read for pleasure – crime novels by Simenon and Mankell – and books for the study of sculpture, the history and the techniques, as well as books to learn about Africa.

I began with Mystery at Tintagel but quickly gave up on stories that were suitable for my age and began to read the novels that I guessed to be the most interesting of my father’s books. The Happy Return, the first Hornblower novel pointed the way to the rest of the series. Reading one book, encouraged me to save up to buy another. I enjoyed best the discovery of the other works by C S Forester; Payment Deferred and Plain Murder and of course, The African Queen.

As it is now with Henning Mankell, the non-Wallander books for example Kennedy’s Brain and The Shadow Girls, are the real treasures.

I have owned enough books to have a bookshop, I am always happy to pass them on, most visitors leave us clutching a book or two.

In 1990 I was giving a talk at the Arnolfini Gallery about my adventures with the Dogon people who live in Mali, when half way through the lecture I lost my voice. Not entirely, but it was reduced to a whisper, I made an unpleasant raspy sound as if I was in pain and had great difficulty speaking at all.

This was not ideal for a lecturer and the consequence was that I could not teach. But I could have speech therapy with Sarah Service, at the RUH. She diagnosed a problem with my vocal folds. For some weeks I was taught how to modulate my breathing and to speak slowly and more clearly, in order to unravel the knots in my throat. What to do with the time on my hands? After all I was quite well, perhaps recovering from stress?

My big idea was to visit museums that held Ethnographic collections. I was fortunate that my college, then known as Bath College of Higher Education, had started a Small Business scheme and the Finance Dept. responded positively to an application for funding. My intention was to list and describe the African Ethnographic collections in England and Scotland, but not Wales and Northern Ireland. The latter, I was told too late, was an omission and that Belfast did have African Art.

I sent a questionnaire to Curators and Department Heads to determine their interest in my project. This was followed by study visits – from Bournemouth to Aberdeen – to 44 museums, sometimes alone and sometimes with Marlene, undertaken by rail or by car. Warehouses up and down the country had thousands of items in store, brought back from Africa during the Colonial period. We were amazed in Warrington for example, to find very large store rooms with box upon box of hidden treasures. My title for this guidebook was African Assortment and, for added value, it included lists of specialist booksellers and dealers in African art as well as suggestions for further reading.

African Assortment was a College financed publication, as were the other seven books written about my adventures in West Africa. Usually, it was Graphic Design students who decided upon the appearance of the books. They were always pleased to have a ‘real’ project in their portfolio. African Assortment was rejected by a publisher in Oxford as not systematic enough, and by a London publisher as having too much text and too few illustrations. So it became a DIY publication, by Artworth, (a misspelling of Atworth, remarked on by Richard Deacon on a letter written to me, he said it was an appropriate error!) 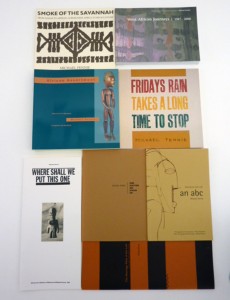 A thousand copies were printed and I repaid the College (most of) the printing costs from sales. Somewhere in the world there are at least nine hundred African Assortments. I know the Vatican has a copy and I know there is one in the Tapies Museum Library in Barcelona, because I have seen it there.

The African decade, how did that begin? Actually only a few miles from home, at Westbury, the address of the tour company Guerba Travel. I’d become curious about African objects, the people who made them and how they were used. I was especially interested in carvings from West Africa (mainly from the former French colonies) and particularly the most well known people in that region, the Dogon. Guerba Travel had organised a trek to Pays Dogon and I was able to sign up for the journey thanks to expenses that came from the College and the encouragement of Colin Painter, then Head of School.

The outcome of that three week excursion from Lome in Togo to Ouagadougou in Burkina Faso, and from Bandiagara to Bamako in Mali, was the exhibition: African. This was a collection of woodcarvings (let’s call them sculptures!) and photographs, displayed in a small gallery upstairs at the Victoria Art Gallery in Bath (and later in other venues). The exhibition was accompanied by the publication of Where Shall We Put This One, a small book that described the origins of the exhibited objects and how they came to be in my, or more properly our, possession. As from that date we described our enlarging assembly of African objects as the Michael and Marlene Pennie Collection of African Art. To my surprise this small show was extremely popular and scores of the booklet were sold at £1 each. I was persuaded to go back to Africa by my employers, having a good Research Profile was becoming significant in Art Schools in this period.

My second trip resulted in Smoke of the Savannah. On my first time out in Africa I had been ‘organised,’ the next time, I determined to go solo, without the comfort of a leader, a cook and a driver; to be on my own, in order to experience West Africa more completely. I had been reading Ousmane Sembene’s book of realistic fiction, God’s Bits of Wood and decided that I would travel on the railway that was the subject of his novel. The single-track line from Dakar in Senegal to Bamako in Mali, riding on the train that was known as the Smoke of the Savannah.

The publication of Smoke of the Savannah coincided with my exhibition, Ensembles at Artsite Gallery in Bath. This comprised of two rooms of woodworks, one room of standing forms – vertical – and the second horizontal, of lying-down carvings. A good show I thought that followed Rebecca Horn’s Missing Full Moon. Her work was actually not in the gallery but in the garden and on sites across Bath.
Between 1987 and 2000 I made twelve research trips to West Africa to study sculpture. The adventures I had in the lands of sunshine and warmth, and among the hospitable people of Ghana, Burkina Faso and Cote d’Ivoire, are recorded in the following small books:

The curiosity to know what lay inside my father’s books, those self-effacing volumes in brown paper, created in me an enthusiasm for the printed word; this zeal for books has been one of the props that has nourished my existence.