I do not consider myself widely travelled, not a traveller for travels sake. My excursions have been limited to journeys with a purpose, rarely as a holiday, and usually to see an exhibition or to make sculpture. There have been quite a few study trips with students – to Paris, Amsterdam, Barcelona and New York – as part of my job at the college, as well as the dozen or so West African journeys, written about in detail elsewhere.

I grew up a little during my four years living in London, but not too much. This was a period that gave me a fond acquaintance, an ever-lasting association with the metropolis. I never feel like a visitor, always returning homewards to my university city. 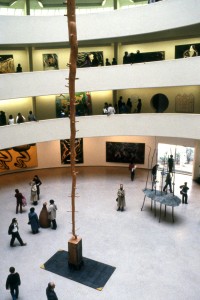 The several journeys I made to America were great happenings. The first was in 1982 with Colin Crumplin, friend and colleague. A South West Arts Travel Award funded this trip, contributing expenses towards a gallery and museum tour in three cities. First New York, then by Greyhound to Philadelphia (in order to spy on Duchamp’s Etant donnes and to marvel at Brancusi’s sculpture), and finally on to Washington (and Rodin Rediscovered, Prof Albert Elsen’s great exhibition at the National Gallery of Art).

We were in New York amid deep snow, and it was freezing cold. The only time I was warm was inside MOMA at the De Chirico exhibition. This was the same year as Italian Art Now: An American Perspective at the Guggenheim. At Salvatore Ala’s Gallery, there was a Penone show. The Artist and Dealer were standing together as Colin and I entered the pristine gallery and both men looked at our dripping umbrellas with disapproval. 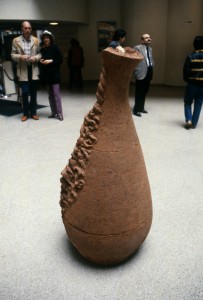 Next day at the Guggenheim I was taking a photograph of Penone’s Tree of Twelve–metres when the artist and Salvatore Ala appeared in the viewfinder. This second meeting gave me another opportunity to tell Penone how much I admired his work. Standing beneath his sculpture, but looking towards the paintings on the walls, he railed against the inequality of labour between painters and sculptors.

“Painters make a few brushstrokes and the work is finished,” he asserted, “but we sculptors have to work long, hard and skilfully, to achieve completion.” I met Penone another time at the Arnolfini Gallery in Bristol on the occasion of his show that was curated by Stephen Snoddy.

Resting for a short while on a bench outside New York City Hall, we were suddenly instructed to “Walk!” by a man with a megaphone. It took me a moment to realise that we were being mistaken for extras taking part in a TV drama and cameras were rolling! We did walk. Away!

My several other visits to New York were study trips with Fine Art students and staff, which included Bob Fearns and Angie Cockayne (in a hotel next door to the Empire State Building) and with Michael Simpson and Rachel Evans. Our students arrived in America luggage-free, and a week later returned to Bath dressed as American sophomores.

One sunny morning in downtown Manhattan, Marlene and I, with our colleagues and some of our students, were waving the Stars and Stripes. A British contingent among the thousands of people who lined the Canyon of Heroes, a narrow strip of Lower Broadway, as shredded paper and confetti rained down from the office towers. We were part of a tribute to astronaut John Glenn and the six crewmembers of his space shuttle Discovery

One singular holiday, Marlene and I were travelling the easy way, by coach to Budapest, Vienna and Salzburg. Having persuaded our driver that it was almost a matter of life and death that we reach Salzburg before noon (gallery closing time on a Saturday) we sped through the Austrian countryside. Thanks to the vociferous encouragement from our fellow passengers, the driver succeeded in arriving just in time for us to enjoy a large exhibition by the Austrian sculptor, Fitz Wotruba. He is a favourite artist, one who was able to bridge figurative subjects and abstraction through his preoccupation with the cube.

When in Bulgaria we took a train ride inland from the resort called Golden Sands, an enclave on the Black Sea. This was a journey to see sculpture – a carving on the hillside at Madara, a Unesco World Heritage Site situated on the outskirts of the small town, on a line from Varna to Sophia – perhaps a journey of 100km. We had been cautioned against going outside the holiday area, nevertheless, Marlene and I took a taxi from Golden Sands to Varna, and then the train.

We were somewhat taken aback when we passed through stations that had their names written in Cyrillic script, giving us no chance of knowing where we were, not speaking the language added a hit and miss element to our adventure. We relied absolutely on the train guard to tell us when we were to alight at Madara. 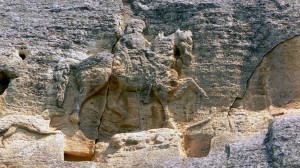 The Madara Horseman is a relief carved between the 7th and 9th centuries; it is twenty-three metres above ground level on a vertical cliff face. A beautiful sculpture depicting a majestic rider, thought to be Khan Tervel; life–size, longhaired and dressed luxuriously. From his horse his spear is piercing a fallen lion and he is accompanied by an eagle and a dog, both symbols of military triumph. We climbed the hillside to get a closer look at the carving and take photographs. Thankfully our taxi driver understood to wait for us and drove us back to the station, a short ride perfumed by acres of sweet smelling roses.

We were on holiday at one end of Bulgaria, our friend, the sculptor Margarita Pueva, was also on holiday at the other end. We flew south by Hydrofoil across the Adriatic, to the artist’s village called Sosopol. (Members of the Bulgarian Artist’s Union spent two summer weeks in Sosopol, a vacation paid for by vouchers provided by the State).

We were not expected. On arrival we cried “Margarita! Margarita! Margarita!” Our calling rang out around the narrow streets and stone houses, until finally she answered us. Margarita, awoken from her siesta, was very surprised and very happy to see us. Without vouchers we were unable to eat at the canteen however, and had to be taken several miles outside the village to find a café and bowls of the ubiquitous Huntsman’s Stew. Thus we stayed with her for too long and missed the last boat back to Varna. Margarita shared the tiny two-roomed apartment with her son and her partner Christopher. There was certainly no place for us to spend the night there. Anyway, it was forbidden for visitors to stay overnight.

Although movement was somehow restricted, Christopher was generous and brave enough to drive us the long way overland in the dark, using up a large portion of his petrol allowance to return us safely to our resort, a midnight car journey back to Golden Sands.

From Bulgaria we flew for a weekend break to Moscow – city of glittering spires and domes and striking wooden churches. In the Eighties the Muscovites were as unattractive as their metropolis was stunning, in the main, pale women without make-up, wearing drab nylon anoraks. The men, also poorly dressed, were often the worse for drink. Our guide was very interested to hear from me about the novel Gorky Park. She directed our coach driver to make a detour so that I could stare at the grass and trees of the park through the cast iron railings.

In 1993 we rented a little house outside Sienna. Driving there we spent a day at the Venice Biennale, to see Damien Hirst’s work. I was impressed then by his invention, the scale of his ambition and his grand themes. But some time later, seeing a Hirst exhibition in New York, the myth evaporated. It was Gerhard Richter’s showing in the German Pavilion at that Biennale that made the most lasting impression upon me. His paintings of Land Rovers as Chariots of Apartheid have stayed with me.

Leaving Venice, the motorway south was paralysed by a rainstorm that obliterated everything. We were forced to stop – waiting for the torrent to abate, before proceeding to Sienna.

Once, just before Christmas we went to Berlin. I had some pretensions to an ethnographic tour of Europe, looking at African collections and exploring the possibility of writing an extended guidebook. This never happened, although we visited collections in Switzerland, at Geneva and Basle and we made a special trip to Koln to meet the anthropologist Piet Meyer and see the Arman exhibition at the Rautenstrauch Joest Museum. 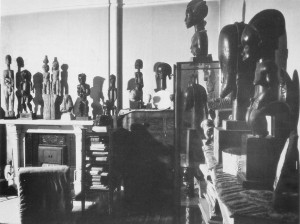 In (West) Berlin we marvelled at the exceptional collections of non-European art and culture held in the museum complex  at Dahlem, we made a beeline for the Museum of Ethnology.

In (East) Berlin at the Pergamon on Museum Island, Marlene and I were two of the more than one million annual visitors to wonder at the original size reconstructions of ancient monuments from Turkey, that filled the great halls.

Going from West to East across the city was not too difficult but we were apprehensive on our return. Standing on the platform waiting for a train to re-cross the border we were uncertain, are the trains going West or further East? The only other passenger boarding the train with us was reassuring, “Going West,” she said.

Having had an invitation from Nick to the opening of Odd Elms Nicholas Pope Sculpture at the Kroller-Muller Museum in Otterloo, to his astonishment we actually went there. Afterwards we stayed for a few days in Amsterdam and bought our first African carving from Gerhard Lambrecht, the beginning of our collection. We did look around the other interesting parts of Amsterdam and made our only visit (to date) to a sex shop. We had to buy something! Where is that keychain?

Not too long ago I was in Amsterdam again to view Joseph Herman’s great African collection at Christie’s, prior to the auction. With Tim Teuten’s help I left a bid. It was important to me to acknowledge the kindness Joseph had shown to me as an art student, and later to both Marlene and me, as we were making a start as modest collectors of African Art. We became familiar with his extraordinary assembly of innumerable ‘miniatures’ that were displayed on shelves around the walls of his home in Edith Grove, next to Castletown Road. In his later years Joseph asked us to visit in the afternoons, because in the mornings he worked. (A good plan and one I have adopted ever since I became three-score years and ten.)

I am happy to record that my bid for an ex-Herman Lobi was successful. The sculpture arrived safely from Holland to take pride of place among other Lobi carvings at the top of the stairs, because Lobi pieces like to be together.

What are the highlights of all this travel? Certainly one recent highlight was my short visit to Barcelona (with Sarah Purvey and Jo Taylor) and the Mies van der Rohe Pavilion. 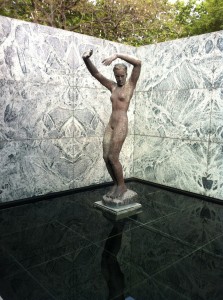 Who are the artists that stand out from the countless exhibitions I have visited over the last half-century?

Two exhibitions are outstanding because I did not see them! The first is Primitivism at the Museum of Modern Art in New York and the second is Magiciens de la Terre at the Pompidou Centre in Paris. These were missed opportunities – occasions when the catalogues are no substitute for the real thing.