Working together at the Cedars, Hughie Clarke and I eventually became ‘brothers in sculpture’. At first he definitely didn’t like me, he thought me opinionated and arrogant, in short, a big head, which I probably was. One afternoon walking together across the Park towards the bus station we met a small dog holding out a bandaged paw, while managing quite well to hobble along on three good legs. Approaching the dog I held out my hand and said ‘How do you do?’ Hughie thought this was very funny. He laughed and laughed and somewhere in the warmth of that laughter we became friends.

One of our undertakings was to form a Sunderland Art College football team, with Hughie as captain and me as goalkeeper. For our first fixture, (the players without training, practice or pre-match team talk) and a large squad of supporters went by bus to Ashington, Hughie’s home-town. This was lunacy of course. Who in their right mind, would take a team of untried novices to play football in the birthplace of Jackie Milburn and the Charlton Brothers? We were thrashed 7–1. Certainly not my best game and we had a miserable journey home. We did not impress the girls who had travelled with us – cheerleaders with nothing to cheer! 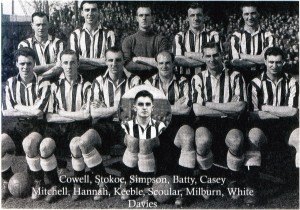 Newcastle United in the 1950s

Hughie worked in stone, I found this dusty, heavy stuff. While he was comfortable to make carvngs like Moore, I was happier working in direct plaster. I had a little trouble with armatures, but managed to make a series of medium sized figurative sculptures, all standing and all female. It was Marino Marini who made it possible for me to make eccentric and (sometimes) inventive forms. I had become a little more attentive to anatomy and proportion after Thubron had chastised me, “Pennie, have you ever seen a naked woman?”

Hughie and I applied for the Royal College of Art in South Kensington together. It was the year when the excellence of Fine Art at Sunderland had received wide publicity in the Press, particularly a large spread in Picture Post. This coincided with the moment when bright young men and women from the North East were heading south, their Geordie accents could be heard in films, Radio, on TV, and in the theatre.

Together we delivered our portfolios, travelling overnight to London (9pm to 9am) by National Coach. At the Sculpture School in Queensgate and had a breakfast tea with Prof. John Skeaping. He lived in his studio, on the premises. He regaled us with the wonderful opportunities that were on offer to successful applicants during the four years of study on the Sculpture Course at the Royal College of Art. Skeaping was impressed, I think, with our enthusiasm and the fact that we had made the long journey South to be certain that our applications and the photographs of our sculpture and our drawings arrived in good time .

From those graduating at Sunderland, students in Painting, Sculpture, Design |(Graphic and Fashion and Textiles), thirteen in all had applied to the RCA. When the letters arrived, calling candidates for interview, twelve of these aspirants were invited to London. I was ‘Unlucky Thirteen’ and I was devastated.

My disappointment was partly mollified because I had (after an interview) been accepted for a one year Art Teachers Diploma course at Goldsmiths. Being trained for employment was an alternative to an artist’s life and one that my family wholeheartedly approved of. From my point of view, a year studying to be a teacher in London was better than staying in Sunderland, regardless of the mantra devised by George Bernard Shaw (that I had scornfully declaimed for the last few years), “Those who can, do. Those who can’t, teach!”

Astonishingly at his interview Hughie was asked. “Are you Pennie, where is he?”

It is still difficult to believe. Apparently the Royal College had sent for the wrong sculpture student! Neverthless Hughie did have an interview and I was asked to attend for my belated entrance exam the following week and coincidental with the days when my friend Alan Price was also being ‘interrogated’.

Alan and I slept at Ray Exworth’s lodgings in Gunter Grove; Ray was a friend of a friend then – he was shortly to become more than that to me.

Believing that London beer was like ‘maiden’s water,’ Alan and I drank to excess the night before our interviews. Half way through the written paper, I had to leave the room for the Gents – my essay remained incomplete. Later that day, still off-colour, I was quizzed by Skeaping and his chum, Douglas Wayne-Hobson. I remember being asked “Have you ever been to the British Museum?”

Hughie and I were accepted by the Royal College and so was Alan. By lunchtime on the day we had learned the good news Alan and I were both quite drunk and very nearly taken in to custody! “Behave yourselves lads.” said the policeman. “And well done!” After the debacle of Hughie’s interview his success was a great relief. 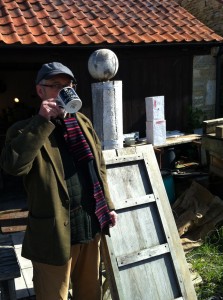 It was around that time that Hughie asked me if I was no longer Joyce Norman’s boyfriend. I enjoyed having two girl friends. One for the college day and another at weekends. Joyce and I had broken up several times. We had been on and off for two years. I did not realise that Hughie was waiting in the wings until there was a party downstairs in the billiard room – a celebration at the end of our Diploma examination and the sending off our sculptures to be assessed in London. Hughie was with Joyce and I was with my girlfriend from Liverpool House. I was quite jealous to see Hughie kissing Joyce.

For our final submission for The National Diploma in Design we were required to make a maquette, a nineteenth century word for a nineteenth century practice, (making a small sculpture then enlarging it.) I made a model for an over life-size sculpture to be sited on a traffic island! I made three ‘figures,’ in direct plaster, looking out at the imagined oncoming traffic. What a daft idea! Formally they were inventive. However I made them with my usual disregard for anatomy, and I think this cost me dear. Arnold Machin RA, the examiner, best known as a medallist, was not impressed. Mr. Machin failed me (and Hughie too). I was to learn some time later that he also failed a great many other candidates who were engaged with contemporary sculpture. Of course I was incensed, but ultimately I didn’t care too much as I was going to the Royal College regardless, albeit after National Service.

During the making of this NDD piece, probably called ‘The Watchers’ I became enamoured of Judy Bruce, the one and only Year 3 sculpture student at Sunderland. A voluptuous, dark haired young woman, Judy was a mediterranean beauty like Sylvano Mangano. Judy was kind and generous and was being taken advantage of by a member of staff in his Morris Minor at least once a week. Both Hughie and I liked Judy a lot. I took her to the cinema sometimes and occasionally kissed and cuddled in the workshop down in the basement. While making my NDD sculpture we had sex. On a rating of one to ten, I scored myself two, an embarrassing performance. Sadly I never had a second chance. When I moved to London I should have asked her to come there. I regret not doing so.