The British Council asked me if I would be interested in participating in Forma Viva. This was a biennial event lasting several weeks, during which half a dozen invited sculptors from around the world made sculpture in one of three Sculpture Parks in the former Yugoslavia. It was Anne Elliot who suggested I submit a proposal. My first was rejected and it was for the second idea that I was eventually accepted for Forma Viva ’80.

My destination was not for the Forma Viva Open Air Steel Sculpture Symposium at Ravne na Koroskem that John Hoskin took part in, or the stone-carving symposium where Hubert Dalwood made his contribution. I followed Peter Startup and his Wooden Sculpture to Kostanjevica na Krki. This is an island village, accessible by two bridges and embraced on all sides by the river Krka, not too far from Ljubljana, in present day Slovenia.

We all worked at a beautiful Cistercian Monastery, just outside the village, known locally as Kostanjevica Kloster, or Castle. In the castle grounds are exhibited over one hundred large wooden sculptures made during the twenty years of Forma Viva. 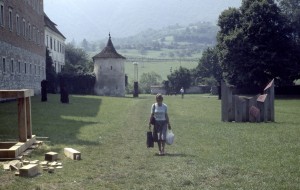 As a pipe smoker, I had been working on ‘pipe’ sculptures. The first completed carving in this group was made for Cannizaro Park Sculpture; an annual exhibition organised by Wimbledon School of Art, consisting of chosen student sculpture and invited staff work, held in the local park in Merton that was once part of the Duke of Cannizaro’s estate.

As Brancusi could make ‘a cup’ the subject of his sculpture, I thought I could make ‘my pipe with pipe-smoke’, the subject of my sculpture. I sent drawings to Slovenia, almost cartoon-like, describing an idea that apparently looked humorous to the selection committee, more so than I had intended. Once there, I believe I was expected to make a sculpture that was more realistic than it eventually turned out.

Marlene and I bought a nearly new Peugeot 104, a car that always seemed, when sitting inside, larger that it looked from the outside. This little white car was a pleasure to drive and took us speedily across Europe (almost without occurrence), except that we got lost in Aachen and were escorted by a police car, to the right autobahn where the 104 raced happily alongside the innumerable Mercedes.

But we had a disastrous night somewhere in Austria when I drank too much plum brandy and did silly dancing. Next morning as we crossed the border into Slovenia we were confronted by oceans of sweet-smelling rapeseed and my hangover got the better of me. Marlene had to drive the rest of the journey into Kostanevica.

My end of year Assessment commitments at Bath Academy meant that I arrived at Forma Viva a week later that the other participants; Yutaka Toriamo from Japan, Negovan Nemec (the home participant), Margarita Pueva from Bulgaria and Doru Covrig from Romania. There were five sculptors rather than the six that had been originally planned for – so, generously, the money for the absentee was shared out between us.
Although I was late starting and anxious to begin work, I had to wait for the man with the chainsaw to arrive. This meant that I had a forced period of thinking time, to sort out a plan: how to make my sculpture from the enormous ten feet long tree trunk of newly felled oak? I was waiting. He came, eventually, on his bike with the chainsaw menacingly balanced on the handlebars.

We were working at the rear of the monastery, a pink-walled building around three sides of a courtyard. We put up plastic sheeting, which was tied to the trees bordering the workspace, to protect us against the occasional early morning rainfall.
Margarita was making a boy on a swing, after her son; Yutaka was working a very tall Knife Edge (he was a Henry Moore enthusiast); Doru waited for the most part, for his tree to be cut into beams at the saw mills, so he could make two giant chairs. Negovan was carving a large natural form, a cross between a cabbage and a cauliflower and myself, older than the others – and so nicknamed ‘Professor’ – as well as smoking a pipe, I was making a pipe-like carving! When I was working I wore a straw hat and shorts, socks and boots and little else. Beginning very early in the morning when it was cool and quiet, carving all day, with no siesta for me or for Negovan.

The chainsaw operator cut my log into three parts; one to act as a base, to elevate the central part, then a second piece, from which I would make ‘the stem,’ leaving the largest possible piece to make a very elongated bowl crowned with a sphere.
I used my big chisels first, for days and days, working on the lying down log. Using gradually smaller and smaller chisels on an eventually vertical form – I finally turned to rasping and sandpapering. For the finishing processes I had an assistant, Marlene was a good smoother. 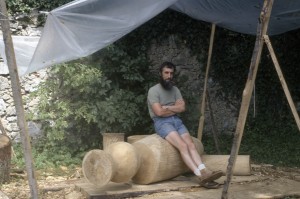 Each weekend the workers from the local cement factory came to the monastery to picnic and to see for themselves how our carvings were progressing. They had, after all, contributed to the costs of the Symposium, and they were enthusiastic investors in this hybrid group of sculptors.

Andre Smrekar and his family, the organisers of Forma Viva at Kostanevica, kindly gave us a welcome picnic. We were all seated around a long table in the garden of their home when the older Smrekar, with whom I shared an enthusiasm for Mario Lanza, asked me, from the head of the table.

“And how is Nibs Dalwood”?
“Sadly,” I replied, “he died a short while ago.” This news was greeted with exclamations of surprise and regret.
“And how is Peter Startup”?
My reply was the same again.
“Sadly he died too, not long ago.”

More surprise and regret and from their expressions, I saw that my fellow guests were momentarily feeling sorry for me, perhaps believing that I, another English sculptor, was destined for an early grave.

We returned to our beefsteak and potato salad with an appetite consequent of a good day’s labour, eating with relish. Our plates empty we were served with a pork chop, our glasses refilled with red wine. As guests we considered it is polite to empty our plates. As soon as did we did this, we were provided with a second steak and another full glass to wash it down with. This was a long meal, with repeated servings until late in the evening, I left top heavy with an extended stomach and wobbly with wine. It was a good night. 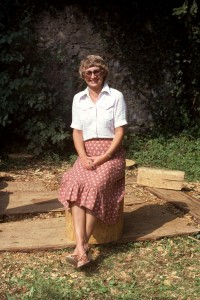 Next day we decided to buy flowers for our hostess, a thank you for the picnic. At the house, while presenting the roses, we were ushered again into the garden. We resumed our seats at the table and were served with the chops and steaks we had been too feeble to eat the night before. Same menu – eat a steak, get a chop, eat that and have another steak. I staggered back to Pod Gorianji, the guesthouse where we were billeted, once more overloaded with meat and drink (constipation threatened).

At the end of the evening we had all been invited to return for a birthday party at the weekend. ‘Oh no!” we groaned.
However at that event I twigged at last. Do not eat all the steak or drink all the wine, to send the signal that you have had enough. This ploy worked very well and the evening ended without excess.

Both daughters, Rachel and Helen, were to spend two weeks with us in Kostanevica, flying into Ljubljana. Rachel, the younger, came for the first visit; initially, such a multi-national group intimidated Rachel – although they made an effort to include and involve her in the general comings and goings. Rachel, became most sociable, when it was time to go back to England.

Helen was the opposite, but no less problematic. As fair as Rachel was dark, she easily took to the group, becoming a family friend of the Smrekar’s, spending time with Andre and particularly his brother Boris and their friends, on vacation from the University at Ljubljana. Boris would from time to time leave the town for the coast, either including Helen or excluding Helen. This gave us, either some good days or some bad days. 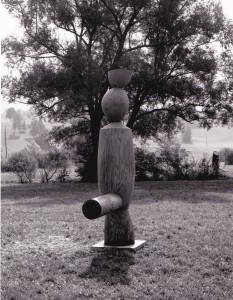 Of course there was a grand celebration at the completion of Forma Viva ’80. I was asked to walk from sculpture to sculpture, wearing my Professorial (orange!) summer suit, talking to camera, as to how each carving had been made and how the wonderful Forma Viva had given the visiting artists the opportunity to make their best work to date. This was actually true in my case. We were filming an item for the local TV news, that I did not see. 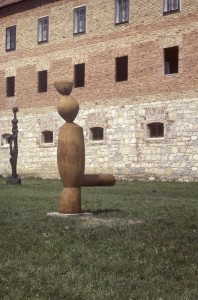 Marlene and I drove back across Europe, arriving in Wiltshire to be greeted by a torrential rainstorm on the M4. We had vowed to be a friend to everyone forever. Leaving behind, close by the Startup sculpture, my Early Morning Pipe – finally, somewhat ambiguous as to which pipe was the subject.

It was a fine sculpture, I have been told that the once fresh green oak is now black, and it has split as the wood has aged, nevertheless it is still standing!
Back at college it was pointed out that the clearest reading of the sculpture was not that of a pipe with a puff of smoke, not a smoking chimney, but a man with a very proud erection. Self-portrait?