I thought Lisle Street was edgy in the sixties, in an exotic area just off Soho. Exhibiting at the A.I.A. Gallery in Lisle Street I became, for a short while, part of the metropolitan Art World. 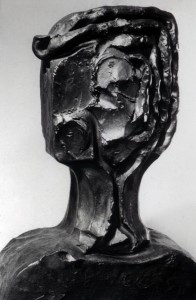 Around this time I spent a day with John Hoskin, it was my twenty-seventh birthday. I was introduced to his Mattheisen and Redfern Gallery friends and someone from the LCC who was commissioning John to make a public work. Another acquaintance of John’s at Justerini and Brooks in Bond Street gave me a present of a bottle of good whisky. I drank too much of it on the train going home, arriving at Chippenham somewhat the worse for wear.

I was in London to deliver a sculpture to the A.I.A. for the annual Members Exhibition, what a parcel that made. The following day I was told that my sculpture had been rejected, but I didn’t care too much because on 24 October 1963, this disappointing event had been crowded out by a celebration at home. Rachel, to whose birth I bore witness, was born alive and well.

As a member of the Artists International Association, having been recruited at the RCA, I had exhibited annually for some years, with William Tucker, Howard Hodgkin and Peter Startup and other soon to be well-known artists. In 1963, the selectors of sculpture for the Members Exhibition were Bernard Meadows and John Hoskin, who should have been my dream team. But they said, ‘No’ to my work. There was some awkwardness and Meadows wanted me to send an alternative sculpture, but I chose not to. Oddly enough the submitted work was the closest I have ever come to making a Meadows-like sculpture: a spiky proboscis shooting out from a box form, as black and shiny as a Kafka beetle, and a very anxious-looking work.

I do not think I was influenced by Meadows the sculptor particularly, more Meadows the teacher perhaps. It was an unhappy sculpture and did not long survive its ‘refusal’. Nevertheless, In spite of this setback during that same year, the exhibition Carey Pennie Threlfall, the work of three sculptors, opened at the A.I.A.

On my first train journey from Paddington to teach at Corsham I chose a compartment with a single occupant, opposite me sat Robyn Denny. That journey began my introduction to Bath Academy of Art. Robyn was, I believe, a member of the Exhibitions Committee that paired me with Malcolm Hughes at the Institute of Contemporary Art in Dover Street in 1965. We were to exhibit in a gallery divided into two spaces, one for Malcolm Hughes: Relief Painting and in the other Michael Pennie: Sculpture.

The largest sculpture, my magnum opus, was Five Columns, made after the avenue of Roman heads in the Borghese Gardens in Rome. Christmas Boxes had a good Press too, as did Blue and Green Blocks – two sculptures that were initially made in clay, cast in plaster or Ciment Fondu, and then beautifully remade in plywood by local wood worker Ron Honeywell. 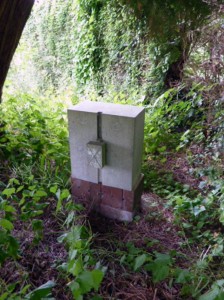 My exhibition was located in the area designated Library; I don’t remember seeing books there, only magazines, leather sofas, a nearby coffee bar and a One Armed Bandit. Julie Lawson, then personal assistant to Roland Penrose (co-founder with Herbert Read of the Institute in 1947), was a more than helpful curator for my first solo show (and she has been a generous supporter ever since). Roland Penrose remained associated with the ICA for more than thirty years. At the opening of Malcolm Hughes/Michael Pennie he was very encouraging. 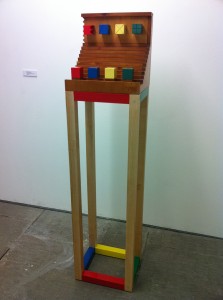 Recently, I was at the Courtauld Gallery to see the exhibition Becoming Picasso Paris 1901 where I met with Julie Lawson again, a brief but happy encounter.

I believe it was Adrian Heath, when he was Chairman of the Artist’s International Association, who rented the upstairs gallery space to Angela Flowers. This was at the start of the Seventies and it was her first gallery and her modest beginnings as an art dealer. It was Adrian who suggested that I should meet her. I was interviewed in an office only big enough for a desk and two chairs; hesitantly I showed Angela my photo album. Angela told me she was only interested in artists with a long-term commitment to their work. I reassured her that I was such a person; she agreed to show my work. So began an association that lasted more than twelve years. 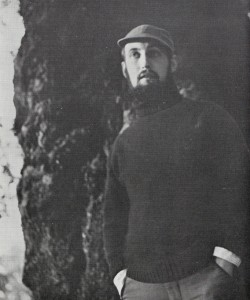 I went off to my Gregynog Fellowship in Wales and began working on the sculpture for my Angela Flowers show scheduled for Easter-time the following year, 1971. There were good works in that exhibition, such as Ship of State, exhibited in white plaster, and a couple of large polyester resin works, painted black. There were more drawings than objects, including a very large drawing in black ink – a plan for an imaginary monument, a Zig with a base area of twelve miles that was intended be sited on Salisbury Plain and would reach the stratosphere.

My show followed Ian Breakwell’s. I benefited from the contrast between his large towers of clay and my more measured works. The  exhibition was well lit by Adrian Flowers, using slightly subdued levels, to mask the brushstrokes on my painted surfaces.

I had a good audience. As ever, someone new and something novel attracted gallery goers. There were a few noteworthy visitors: Humphrey Burton came with Frank Muir the comedian to see the new gallery. They were polite and added a touch of glamour to the opening. My first taste of London celebrity. The Contemporary Art Society bought Ship of State (made in Wales), and the most recent sculpture exhibited, it was chosen by Pauline Vogelpoel, then Organising Secretary of the Society and soon to be Director (and possibly the most beautiful woman I have ever met). The large drawing in a very spindly frame, Page from a Giant Sketchbook, went to Northern Arts and Bishop sold too, but not the Supremes.

Bishop was also originally modelled in clay. It began as another ship-like image, predictably a sculpture of my own size, and at first it lay along the studio floor, floating. Next I switched from clay to a one-inch thick polystyrene sheet and built a more precise version, in a material easy to cut and paste or pin together. Next came a plaster mould and then a cast – a laminate of polyester resin and fibreglass. Finally, I painted it with the ubiquitous Blackboard Black. But instead of showing it as a horizontal piece, the Flower’s space was too small to accommodate Bishop lying down among the other sculptures, it stood vertical, like a mitre, hence the title. Another sculpture with straight lines – I used to say architectonic – well organised and modular. Bishop is somewhere in the University of Wales Collection at Aberystwyth.

Richard Francis’ offer of three weeks work making a sculpture in the garden of Tate Britain as part of the Sculpture Festival of 1986, was very welcome. In fact it was a highpoint in the mid-eighties. A wood carver was preferred. I said ‘Yes’ to the £250 a week and some expenses; I worked next to Richard Deacon, a fabricator. This event was called Sculpture on the Lawn 2. Richard and I were the second pair of sculptors taking part in this mega event, working on covered stages from dawn till dusk in the garden overlooked by the Director’s office. We followed Peter Randall-Page, stone carver, and a youngster, Julian Opie, just out of Goldsmiths and at that time a metal worker.

With Marlene, I transported a tree trunk, lime wood, from Corsham to London by flat-bedded truck. She left me at the Tate with my wood chisels and mallets (I was staying in London for three weeks), and drove the truck back to Barry Baldwin’s yard. My temporary home was at Simon Read’s flat while he was away sailing. I had no other commitments other than my carving; Richard working in his home city, had his family life to contend with.

Always an early riser, I would be at work before Richard. He tried harder and harder to arrive first at the Tate, cycling from South London to succeed at what was to be the only competitive element between us. Richard made his sculpture using thin sheets of galvanised steel, cutting these sheets into strips using a large metal ruler and a Stanley knife, and doing this day after day for the greater part of our twenty-one days. On Saturdays and Sundays we had hundreds of visitors. Friends and family came and unexpected friends appeared from distant days. At the busiest times we thought of ourselves as monkeys in a zoo, almost overwhelmed with onlookers. When Richard won the Turner Prize in 1987, Marlene and I sent him, not flowers, but a bunch of bananas!

I was carving Red Head, a sculpture that had particular beginnings in Papua New Guinea. It was a ‘head with coiffure’, on three supports as a neck and attached on to a base. An unusually complex sculpture for me, a spherical form with spaces between the pillars. This was an attempt on my part to open up the tree by piercing the cylinder of the trunk.

These were exciting times, especially for Richard, as it was just after his first exhibition at the Lisson Gallery, when every piece was made by a different method and using ‘new’ materials. He was the ‘hot’ new kid on the block and was gaining a lot of attention from the Art world.

We relished a weekend when an international conference of dealers and curators convened at the Tate. Salvatore Alla came to visit Richard; I had met him a short while before in his gallery in New York, when he was showing Penone. Lynne Cooke brought David Sylvester, again to see Richard, unaware that I had spent the best hours of my studentship in seminars with the great man. I had just stained the lime wood Red – a startling colour taken from the London buses going along the Embankment, red against the green. David Sylvester suggested an additional blue but I thought that using red was ample risk. Chicken! I should have taken his advice. 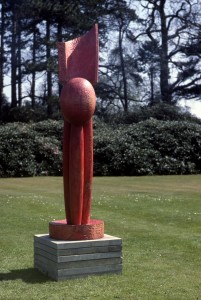 Completed, both sculptures were sited in the garden for some weeks. Returning to the Tate later we found that Richard’s lightweight piece had been blown off course, a victim of that summer’s gales. It was left to Marlene and me to put it right. The title of this elegant sculpture is The heart’s in the right place (undressed) and the dedication was ‘For Michael’, a nice touch!

Although it was never a totally convincing sculpture, I exhibited Red Head at the YSP and then at Artsite in Bath, working on it again for each venue. At first it was refined and then it was changed radically, until eventually the base was cut off, then the pillars and the coiffure removed and finally only the ‘head’ remained. This ovoid remnant still endures; it is an essence, a distillation of all that went before it, no longer red but white. Now called simply Head it has been a redoubtable participant in exhibitions ever since, and recently a valued member of Band of Woods exhibited in Huddersfield – this is a piece of wood with a long history.